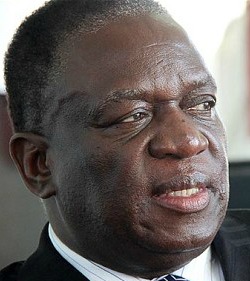 VICE President Emerson Mnangagwa says government has abandoned elaborate bureaucracy with the aim of attracting foreign direct investment which the country is in dire need of.
There was an outcry from the local business community last month when billionaire Aliko Dangote visited Zimbabwe to discuss investment deals.
The Nigerian tycoon and Africa’s richest man, after meeting with President Robert Mugabe and top government officials, was immediately promised that approval of his projects would be fast-tracked.
Mnangagwa however, insisted that all serious potential investors would be treated the same way.
“The Press went out its way when Dangote came to say because he was a billionaire you shortened everything.
“No we would want to do the same to everybody not to Dangote Alone,” Mnangagwa said last week.
He was addressing western diplomats and heads of local UN agencies celebrating the 70th anniversary of the United Nations in Harare on Friday.
“We are committed to improving the ease of doing business and the creation of special economic zones,” Mnangagwa added.
Zimbabwe has also shifted from an anti-West rhetoric and now welcomes “everyone who seriously wants to do business with the country”, the vice president added.
“We have put in place raft of measures so that so that Zimbabwe becomes a competitive investment destination and I am charged with that responsibility of making sure that Zimbabwe becomes competitive.”Advertisement