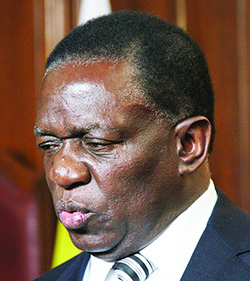 “It will never happen,” Mnangagwa said in a speech to his Zanu-PF party supporters in central Zimbabwe, broadcast on television.

His statement comes two months after white farmer Robert Smart got his land back after being evicted in June by ex-president Robert Mugabe’s government.

Thousands of white farmers were forced off their land by mobs or evicted, with Mugabe saying the reforms would help black people marginalised under British colonial rule.

Critics blame the land redistribution for the collapse in agricultural production that saw the former regional breadbasket become a perennial food importer.

The government has indicated it will issue 99-year bankable leases to beneficiaries of land reform but Mnangagwa on Saturday said land owners must be more productive.

“Our land must be productive. We must mechanise and modernise our agriculture,” he said, adding that the land reforms were “irreversible”.
Mnangagwa, who came to power after a military intervention ended Mugabe’s decades-old rule last year, said new elections would be held in July.

The former deputy president said his government’s top priority was to revive the ailing economy.

“Our economy is struggling, unemployment is high, our youth lack opportunities, too many people are unable to afford essential goods for their families and our infrastructure is stuck in the past,” he said.