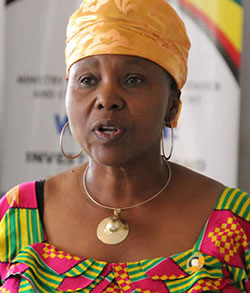 THE government has with immediate effect suspended the trade in commercial quail farming saying this was in keeping with its mandate to protect citizens from conmen who were claiming the bird and its eggs had medicinal value.

The announcement was made on Thursday night by the Minister of environment, water and climate, Oppah Muchinguri-Kashiri.

She dismissed claims that quail birds had medicinal products for curing various ailments without proven research being carried out.

Muchinguri-Kashiri’s announcement came as Kuyedza’s Women’s Club at the ZRP’s Morris Depot in Harare had more than 10 000 quails for its project.

“Let’s not take things that are not authentic. There is need for proper research so we are going to engage officials from the ministries of health and agriculture so that we protect the people
from conmen,” the minister is quoted as saying on the state media.
“It is a big warning to the breeders to lie that there are benefits that you will get from the birds,” she said.

The minister’s announcement is a big blow to thousands of people who had ventured into commercial quail production in an effort to cushion themselves from the harsh economic conditions in the country as it had become a source of livelihood.

It is reported that for one to be a domestic producer of the birds, one needs to acquire a $1,000 permit from Zimbabwe National Parks, permission from the ministry of health and the local council.

The quails had taken the country by storm and have been on high demand in the past few months, with an adult bird fetching as high as $6 each with a crate of its eggs being sold for more than $7.

However, panicking producers were soon after the announcement by the minister advertising their products on social media for as low as $0.10 amid reports that law enforcement agencies were now preparing to descend on law breakers.Advertisement