THE High Court has granted an interim relief barring government from evicting more than 12 000 Chilonga villagers from their ancestral land in Chiredzi.

The interdict was granted Friday after six villagers and the Trustees Centre for Natural Resource Governance approached the High Court seeking an order to stop their evictions. 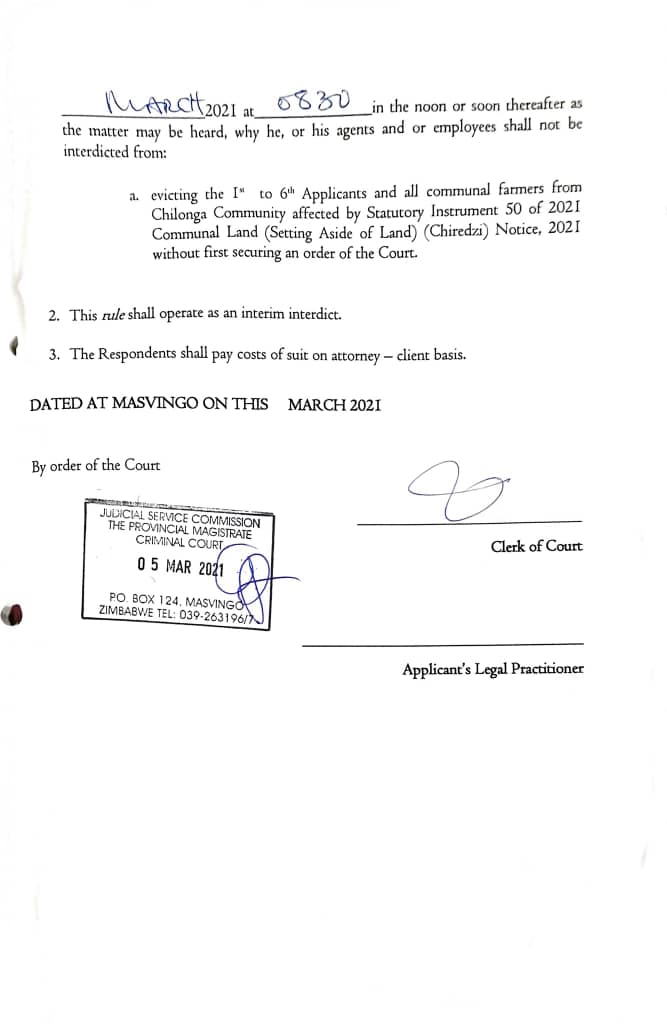 The displacement of the 12 000 Chilonga villagers of the Shangaan/Tsonga tribe from their ancestral land has sparked an outcry with many stakeholders calling on government to reverse the controversial decision.

The opposition MDC Alliance has described the evictions as ‘heartless and cruel’.

The villagers are being evicted so as to pave way for a grass farming project by a Chinese investor to feed Dendairy cattle.

Last week, government approved Chiredzi villagers’ relocation to allow the dairy company to use the land for a Lucerne grass project.

Government, through its various departments, has since described the grass project as part of its Vision 2030 and blamed the opposition for allegedly misleading the Chilonga villagers.

Local authorities are claiming that contrary to misleading reports, the Chilonga villagers were consulted and were the biggest beneficiaries of the planned developmental project.

Their legislator Farai Musikavanhu said the project was good for the community and they were the biggest beneficiaries.

“Consultations were done and I can declare that as a resident within the community, I witnessed this happening and I attended some of the meetings as their political representative,” Musikavanhu said Thursday.

“Those that are against the relocation need to be read the Statutory Instrument in full and the villagers are fully covered by the law from communal to commercial use of the land, so they are de facto covered in the process of benefitting.

“It’s very unfortunate that the opposition turns to put a negative narrative to all developmental projects and demonise vision 2030.”