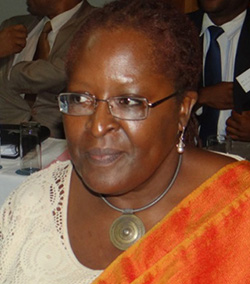 HARARE: The Consumer Council of Zimbabwe (CCZ) is engaging producers of basic commodities with a view to establishing the causes of on-going price hikes and seeing how long-term solutions can be found to protect consumers from unnecessary costs.
CCZ executive director Rosemary Siyachitema said in an interview that prices had been on a steady increase since May, but recent hikes in December had left consumers worse off.
“If you look at economy beef it used to be 3.80 U.S. dollars per kilogram but now it is between 6 dollars and 8 dollars per kg. The same with pork and dried fish. In fact all meat products are going up and you are just seeing a consumer who is overburdened, especially during the festive season,” she said.
Siyachitema said CCZ, together with Minister of Industry, Commerce and Enterprise Development Mike Bimha, had been meeting various stakeholders over the past two days to establish why the prices were going up.
They met bakers on Monday who had increased bread prices by 10 cents to 1 dollar a loaf citing problems along the value chain.
The meeting resolved that the bakers revert to 90 cents per loaf with effect from Tuesday, the same day CCZ and government met producers in the meat industry.
“Again you see that they have problems along the value chain. But I think what is important is that we should change the way we do business. The reason why business is in business is because of consumers. It is not right for business to profiteer from consumers,” she said.
Retailers have been hiking prices over the past few months but there have been sharp increases in recent weeks.
Cooking oil, for instance, has gone up from between 3.50 dollars and 4 dollars to between 4.40 dollars and 4.50 dollars while other commodities such as rice and detergents have also been on an upward spiral.
Fuel prices have also been on an upward spiral with petrol just 1 cent from breaching the 1.40 per liter mark.
Some retailers have different prices for cash and mobile banking, with consumers using plastic money paying more for goods.
Siyachitema said long-term solutions are needed to ensure that prices are kept low and that businesses do not have to encounter a lot of impediments such as shortage of foreign currency needed to procure some of the raw materials.
“A lot of things have been causing impediments. We might not get results tomorrow but we are interrogating how these prices are arrived at and also ensuring that industry is assisted,” she said.Advertisement

President Emmerson Mnangagwa on Monday night condemned the price increases and warned that the practice would not be allowed to continue.
“Government notes with concern the existence of a multi-tier pricing system and this cannot go unabated.
“We need to examine our modus operandi as captains of industry and commerce if we are ever going to move forward,” he said.
He said government wanted to protect the rights of consumers and would not tolerate the hiking of prices without justification by dealers and business people.
“I urge our wholesalers and retailers, as we approach this festive season, to refrain from profiteering by charging unscrupulous prices and never to put measures that may derail our efforts for a quick turnaround of the economy.”
Harare resident Peter Kuwana said the increases in the prices of basic commodities would affect many people during the festive season.
“I am only buying basic necessities but even these are very expensive. The festive season is not turning out to be one of spending and merrymaking but one of saving the little money that we have,” he said.
Costa Mubaiwa said he would try to do the best for his family under the circumstances.
“It will be less of everything but I will try and make sure that the family shares the rice, beef and chicken that will be available. Christmas is a very important date on the calendar, so it would be unfair to deprive especially your children on this special day,” he said.