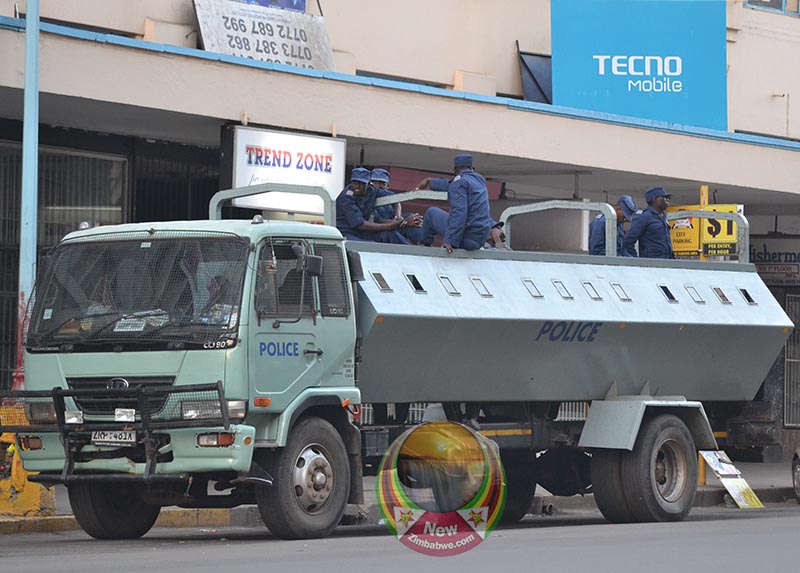 ZIMBABWE’S towns and cities are bracing for a lockdown after government announced it was deploying police in “hot spots” to deal with protests called by the opposition, civil society groups as well as labour against biting economic hardships.

The development points to the possibility of an explosive situation after the ruling Zanu PF party’s youth league it was ready to stop the opposition demonstrations.

Home Affairs Minister Cain Mathema, in a statement late Sunday, urged citizens to remain calm, assuring those willing to work to do so without fear of being molested.

Civil society groups, labour federation the Zimbabwe Congress of Trade Unions (ZCTU) with support from the opposition have called for a stay away in protests against a 200% increase in fuel prices announced by President Emmerson Mnangagwa last week triggering a fresh wave of prices of basic commodities.

Mathema said police have deployed officers in all residential, shopping centres and CBD to conduct patrols, surveillance, stop and search as well as “account for unruly elements who may try to disturb the tranquil environment which is prevailing in the country”.

“May I urge Zimbabweans to continue undertaking their various social and economic activities as usual. Members of the public should feel free to access services from various entities without any hindrance,” said Mathema

The minister urged transport operators to continue offering “services to potential passengers as stipulated in their Road Service Permits and Route Authorities”.

“My ministry has implored security agencies to take action on some rogue groups who are circulating old photo-shopped videos and pictures of purported violence and demonstrations on the pretext that this is taking place in Zimbabwe.

“The Commissioner General of Police has put the Zimbabwe Republic Police on high alert and will ensure that the law is applied without fear or favour on anyone who incites or engages in any form of violence and unsanctioned gathering.”

“We will not allow the opposition to push us into a corner, we know they have promised to destroy cars and infrastructure, so we say to them this is not going to help anyone, it is either them or us, no one is going to be helped by demonstrations.

“This is not a church, obviously we will not sit down and watch them destroy us, causing anarchy and violence in Zimbabwe. That is not going to happen,” Matutu said.

He added: “These demonstrations are not going to provide these basic commodities to you. Our appeal is not to the MDC, but to the general public as they are the ones who my then be caught unaware of the consequences, so we say to them do not be misled or abused.”

Six people were killed in August last year after pro-opposition demonstrators stormed Harare demanding the release of presidential election results leading to clashes with police and the army in which live ammunition was used.

Zimbabwe has been on a downward spiral since government announced a 2% transactional tax across the board in September last year that resulted in shortages of basic commodities and mainly fuel as well as a spike in the currency exchange rate.