THE government has dismissed as false and “mischief” a message circulating on social media platforms that people who applied for passports between 2019 and 2020 can collect their travel documents starting Monday.

Thousands of citizens applied for passports over the past two years but the travel documents have not been processed as government said there was no foreign currency to import material required for processing.

The hoax message read; “The Registrar General would like to Advise the General Public that those who applied for their passports between 2019 to February 2020 period. All your passports are ready for collection and should be collected at Regional Offices from Monday the 15th of March. Please kindly note the passport will be issued at no extra charge. Regards Joshua Taderera.” 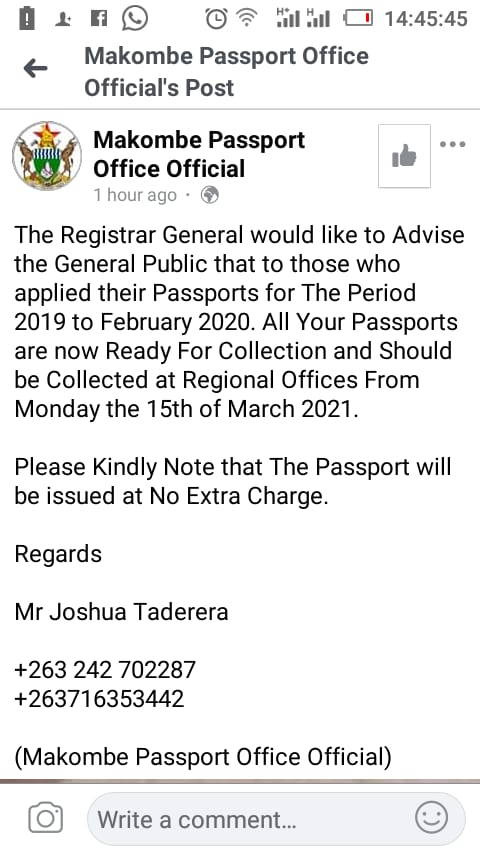 However, Mangwana said the message is false and a mischief.

“Do not fall for it. It is a mischief. We wish it was true but it is not,” Mangwana twitter this weekend.

For years, Zimbabweans have endured challenges in accessing passports with some resorting to sleeping for days outside Registrar General (RG) offices in the hope of accessing the travel documents.

Some RG officers have also taken advantage of the situation and demand kickbacks for one to access the travel document.

Currently, the RG’s Office is not accepting new applications or renewals as it was closed for most part of 2020 and early this due to the Covid-19 pandemic.

Thousands of Zimbabweans are desperate to acquire new passports and flee Zimbabwe due to deteriorating economic situation and an unstable political environment.

Due to the non-availability of the travel documents some desperate Zimbabweans have resorted to illegally cross the country’s borders to neighbouring countries in search of a better life.