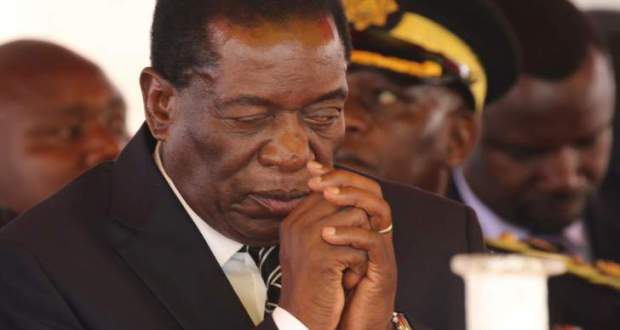 Sleeping with one eye open...President Emmerson Mnangagwa
Spread This News

GOVERNMENT Friday dismissed social media claims President Emmerson Mnangagwa has avoided taking his annual leave for fear of a coup against his administration.

Zimbabwe is in the throes of a deepening economic crisis that has condemned the average citizen to abject poverty with government blamed failure to remedy the crisis.

Among reasons for the overthrow of former President Robert Mugabe by then military commander and now Vice President Constantino Chiwenga were the late leader’s alleged inattentiveness to the national crisis.

The situation has since “moved to another level” with things now worse under Mnangagwa, fuelling social media reports the country’s security organs had become increasingly impatient with the national leader.

Mnangagwa is said to be sleeping with one eye open while avoiding foreign travels since VP Chiwenga recently returned from four-month Chinese sojourn during which he was receiving treatment from a hospital in the Asian economic giant.

But Information Permanent Secretary Nick Mangwana said Friday all the hullaballoo about a possible Mnangagwa ouster were hogwash.

Unlike former Mugabe who rarely missed his annual leave, Mangwana said, Mnangwagwa was a different kettle of fish.

“President Mnangagwa’s presidency is completely different from the previous dispensation. He will take his annual leave on the day of his choosing like everyone else,” Mangwana said.

He added: “Succession in Zimbabwe happens as a constitutional process and being on leave is not one of the conditions for succession.”

Top journalist and socialite Hopewell Chin’ono has sparked debate around possible coup fears by Mnangagwa raising questions over the latter’s failure to take his leave.

Chin’ono’s post attracted a chain of responses with some suggesting Mnangagwa, through glaring acts of commission by his administration, could have set himself to possible ouster just like his predecessor.