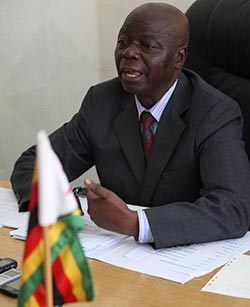 THE government has awarded a $1.3 billion contract to add 600 megawatts (MW) at the coal-fired Hwange power station to China’s Sino Hydro, after another Chinese company failed to start the project, a cabinet minister said on Wednesday.
Harare has licensed several independent producers to increase power output, but most of the projects are yet to take off because of concerns over investment laws which may force foreigners to transfer majority stakes to local blacks.
Zimbabwe initially awarded Hwange tender to China Machinery and Engineering Company in May last year but it failed to meet a design and construction timeline, energy and power development minister Dzikamai Mavhaire said.
“CMEC however failed to conclude the contract within the stipulated time frame that they had agreed upon with the Zimbabwe Power Company and Government of Zimbabwe, hence, the tender was cancelled in May 2014,’ energy minister Dzikamai Mavhaire said in a statement on Wednesday.
“The government, through the Ministry of Energy and Power Development has therefore, directed that the tender be awarded to Sino Hydro. Sino Hydro were the second highest bidders for the project.”
The companies did not respond to request for comment.
Hwange, which is in the northwest of the country, currently operates at 63 percent of its installed capacity of 900 MW.
Sino Hydro in January signed a $355 million contract to expand the 750 MW Kariba hydro-electric plant by adding 300 MW.
Zimbabwe produces 1,200 MW of electricity against a peak demand of 2,200 MW because lack of investment has left the former British colony relying on ageing plants and a worn out grid, which results in frequent blackouts.
The country also imports power from Zambia, Mozambique and the Democratic Republic of the Congo to meet demand.Advertisement