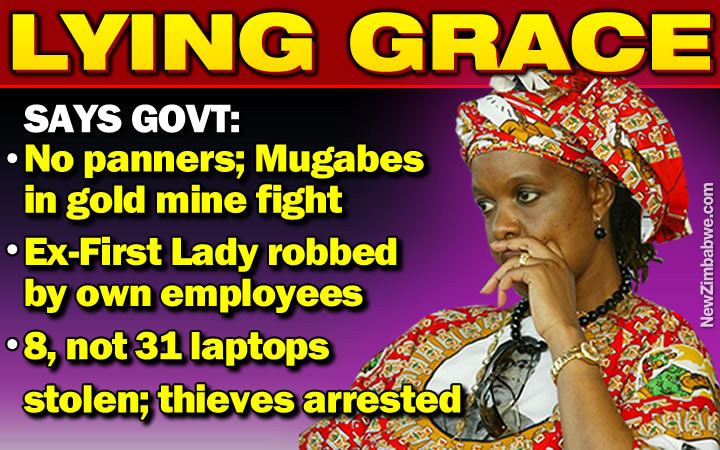 THE government has dismissed as lies claims by former first lady Grace Mugabe that her Mazowe estate has been invaded by 400 illegal gold panners and that some 31 laptops were stolem from an orphanage she runs at the property.

Grace, the once-powerful wife of former President Robert Mugabe, bemoaned the reduced number security personnel provided to the former fist family by government and further claimed that the invasion of her property was politically-motivated.

The Mugabes, whose children used to drench $50,000 wrist watches with expensive champagne into are struggling to cope with their much reduced after the now-94-year-old Mugabe was toppled by a military revolt last November.

In a statement Sunday, Home Affairs Minister Obert Mpofu, investigations established that there was no invasion by illegal miners at Grace’s property.

Mpofu also said contrary to the former first lady’s claims that 31 laptops had been stole from her orphanage, police established that only eight had ben stole by her staff and not from the orphanage but a private school she also operates in the area.

Regarding the claimed invasion by gold panners, Mpofu said it had since been established that the Mugabes were involved in a mining dispute with three other syndicates which is presently before the High Court under case number HC293/18.

“On March 29, 2018, the former First Lady made a report at ZRP Mazowe alleging that 400 illegal miners had invaded her lemon plantation and vandalised the field and irrigation equipment. On March 30, 2018, another report was made to the police that illegal miners had been sighted at the Amai Mugabe Children’s Home,” said Mpofu.

“The ZRP attended the scene on 30th and 31st March 2018 and established through interviews and physical checks that there were no illegal miners at the children’s home and lemon plantation. The inquiries revealed that there is a mining dispute between the former First Family and three mining syndicates, Mondo 3 led by Bright Maonga, Mondo 4 mining claim led by Shepherd Nyazvingo and Xmas 159 led by Mohammed Khan.

“The syndicates went to the High Court and obtained a provisional order which bars the police and Gushungo Holdings from interfering with their mining operations, High Court order HC293/18 refers.”

According to Mpofu, Grace Mugabe had also been disingenuous when claiming that 31 laptops had been stolen from her children’s home.

“On March 2, 2018, the caretaker at the Amai Mugabe School in Mazowe noticed that eight laptops were missing from the storeroom and informed the school administrator on March 6, 2018,” said Mpofu.

“A report was subsequently made to the police on March 8, 2018. Police officers attended the scene and established that there was no sign of physical break-in and indications were that duplicate keys had been used to gain entry.

“This showed that the offence was an inside job.”

Robbed by her own employees … Grace Mugabe

Mpofu said police investigations discovered that two employees at the school Amos Masimure, 29, and Wilson Pomba, 32, were the suspects and they were arrested. The two have since appeared at the Bindura Magistrate’s Court.

Masimure was convicted and sentenced to two-and-a-half years in jail and ordered to restitute the complainant $1,500 while Pomba is out on $50 bail.

According to, Mpofu said six out of the stolen eight laptops that had been sold to some people in Harare have since been recovered.

The government has also defended the reduction in the size of the security detail assigned to the former first family.

“The Government of Zimbabwe, through the Ministry of Home Affairs and Culture would like to point out that the provision of security to the former First Family’s premises is regulated in terms of Statutory Instrument number 153/2017 which was issued by His Excellency, Cde E.D Mnangagwa and gazetted on December 22, 2017,” said Mpofu.

“On March 9, 2018, the security committee comprising Zimbabwe Republic Police, Zimbabwe National Army and President’s Department met and resolved to reduce the deployed personnel to the former First Family to a total of 16 police officers. Let me reiterate that this review was guided by SI 153/2017.”

Relations between the Mugabe’s and the new Emmerson Mnangagwa-led government have worsened after the former president recently spoke for the first time about his ouster, describing it as a coup and calling the successor administration illegitimate.

Mugabe has also met opposition leaders such as Joice Mujuru and reportedly backed a fledgling opposition party formed by loyalists who went into exile after the he was deposed.

Grace is convinced that there is a political had behind the disturbances at her property.

She told local media: “Does it mean that if President [Emmerson] Mnangagwa is removed tomorrow, he will be disposed of his investments? Is this how he wants to be treated with his investments?

“This is politically motivated, as you can see that when we got there, they were singing ‘kutonga kwaro garwe’ (a song popularised during Mnangagwa’s takeover of power).”