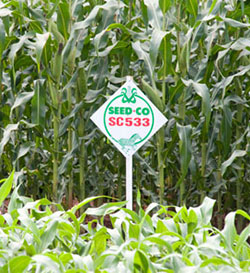 ZIMBABWE’S biggest seed maker, SeedCo says failure by government to settle debts was hurting performance, and urged the Treasury to speed up payments.
SeedCo’s business model relies strongly on government deals, but the state’s failure to pay on time usually result in higher financing and operating costs that affect profits.
The state owes SeedCo $13 million, which accrued through quasi-fiscal activities by President Robert Mugabe’s Zanu PF party during the four-year tenure of the unity government with Movement for Democratic Change formations but was transferred to Treasury after the veteran ruler won general elections last July.
Speaking at an investment conference, SeedCo finance director Felistas Ndawi said governments in other countries in the region where the group has operations had paid off their debts.
“But in Zimbabwe, it is still a challenge from last year, what was paid was just a portion of the money,” she said without giving figures, adding that the seed producer would not write off any bad debts.
“We are happy they said the (government) will eventually pay up but we do not know when the money will come.”
SeedCo received a substantial order from the Zimbabwe’s Presidential Inputs Programme in 2013 to supply the bulk of the scheme’s 16,000metric tonnes of seed maize.
The government paid a 15 percent deposit, 10 percent on delivery and was meant to settle the balance in instalments.
Ndawi said since dollarisation in 2009, SeedCo’s operating costs have risen faster than revenue due to mainly slow payments from the government.
“We would prefer a model where we partner with financial institution to assist farmers finance their businesses,” said Ndawi.
Costs climbed 68 percent during the first half of 2010 versus revenue growth at 58 percent before expanding 65 percent in the full-year to 2011 against revenue increase of only 27 percent.
In the full-year 2013, operating costs rose five percent and revenue declined by six percent.
A change in public agriculture policy in Zimbabwe, Zambia, Malawi, Rwanda or Tanzania, countries where SeedCo is actively involved, could mean a significant reduction in the company’s volumes and revenues. Droughts may also cause headaches.Advertisement