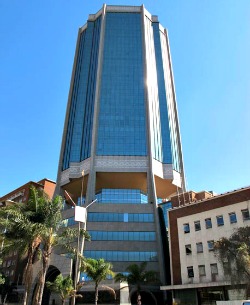 GOVERNMENT has issued Treasury Bills worth $103 million to repay part of the central bank’s debt to banks and farmers which accumulated during the pre-dollarisation period, Parliament heard on Monday.

The central bank has a $1,35 billion debt, due mostly to gold miners, banks and exporters after raiding their foreign currency accounts to fund the cash-strapped government.

Zimbabwe’s own currency fell victim to hyperinflation, which reached 500 billion percent in 2009, forcing the government to adopt a basket of nine foreign currencies, including the greenback, the rand, Yuan and Pula.

“We have issued about $103 million worth of treasury bills to try and deal with some of the obligations that the Reserve Bank had with banks and tobacco farmers,” Ministry of Finance permanent secretary, Willard Manungo, told the parliamentary committee on finance and economic development.

The RBZ debt assumption bill approved by Cabinet in March would also be brought before Parliament for approval, he said.

Of the amount, $93 million will be repaid to banks and $10 million to tobacco farmers.
He said tobacco farmers were owed over $30 million and more TBs would be issued once the actual outstanding amount had been validated.

Members of Parliament requested Manungo to supply them with a breakdown of the RBZ debt, claiming that the figure could have been inflated.

Manungo said the ministry’s debt management office was in the process of validating the debt.
“What we are doing … is to go over each and every single debt and validate it and so at the end of the exercise we will be able to confirm the exact indebtedness of the Reserve Bank ,” Manungo said, adding that this process will be completed by first half of this year.

Chairman of the committee, David Chapfika, said in future the central bank’s borrowings should be monitored and approved by the (finance) ministry.

“The ministry should get involved as much as possible with what is going on at RBZ, especially at this difficult time (of the liquidity crisis),” he said.

“Any borrowing that will ultimately have a claim on the Consolidated Revenue Fund, the minister would have to sign on it and these will come through Parliament for ratification,” he said.
Bulawayo South MP, Eddie Cross wanted to know whether RBZ had assumed its role as the lender to government from CBZ Bank.

Manungo said treasury had been working with RBZ and CBZ on the administrative processes of transferring the role back to RBZ.

“Some of the activities that have been undertaken so far include setting up the platform for payments to link Treasury with RBZ. Last week we tested the link,” he said.

He said the RBZ and the ministry’s project office were also putting up structures to facilitate production of electronic bank statements, adding that the process of the transfer was at an “advanced stage.”

Manungo said government was yet to raise the $200 million to recapitalise the central bank.
On the $100 million Africa Export and Import Bank (Afreximbank) facility to revive the interbank market after its suspension four years ago, Manungo said the bank was finalising the facility agreement which would be signed by Treasury, RBZ and other participating banks.

“Currently all the participating banks are submitting all their eligible assets to Afreximbank,” he said.
As part of efforts to harness resources from the Diaspora, Manungo said the ministry was working with CBZ on modalities of issuing a $200 million bond to be guaranteed by Afreximbank.
“Financial advisors of CBZ are finalising the term sheets,” he said.

He attributed the debt to overspending by ministries and departments which he said were consuming more than their allocated budgets.

“We are working with the service providers to ensure that we align some of the expenditures to the levels we have indicated and we are doing that on a monthly basis,” he said.Advertisement