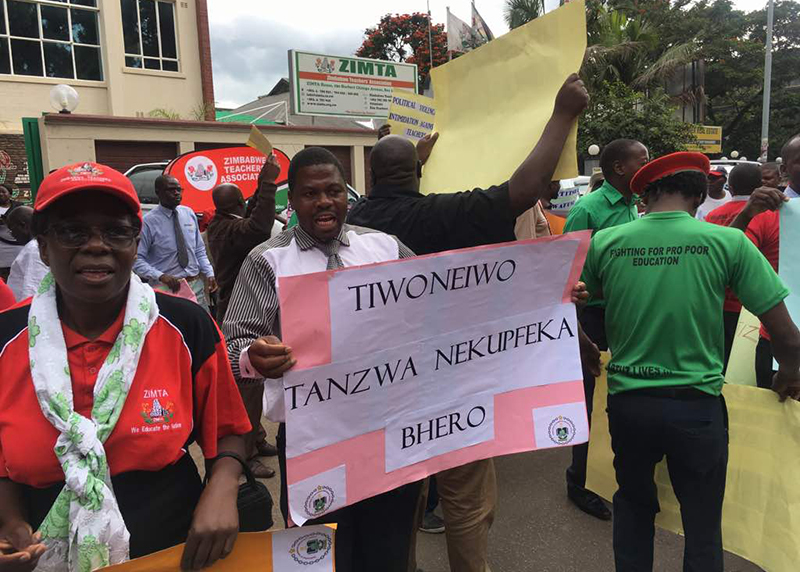 THE government has increased its civil service pay hike offer to 15 percent in a bid to avert a strike by restive teachers.

Unions had rejected an initial 10 percent increment but held back on the industrial action pending consultations with members and fresh talks with the employer.

The Zanu PF administration returned with an improved offer at the second meeting of the National Joint Negotiating Council (NJNC) on Monday.

Union leaders were however, not impressed.

“The Apex council, while appreciating this gesture, is still urging Government to improve the offer to a level at or above poverty datum line for the lowest-paid civil servant.

“The Apex Council wishes to advise its members that dialogue is ongoing until such time when an acceptable deal has been reached.”

“We last had a salary increment seven years ago and getting a 15 percent increment means we may go for another seven years without an increment,” Majongwe told NewZimbabwe.com.

“We need to be given something reasonable. The increment given to us will be walloped by charges as it is availed to us in plastic money and this means it is very expensive for our members.”

“We reject the process of negotiations and outcome of the same,” he said.

“We note with disdain the delaying tactics being employed by government and its surrogates at Apex.

“The members will now lead us on a way forward that will stop these shenanigans.”

Apex head Alexander however said there was no need for a strike as talks were ongoing.

“There is no need for industrial action because we are engaging,” she said.

“Government is presenting its position and we as workers we are also presenting our position. For now, we continue with service delivery while negotiations continue.

“We are now going with the new offer to our membership and hear what they say also.”

President Emmerson Mnangagwa’s government is scrambling to avoid another politically damaging strike ahead of crunch elections this July.

The Zanu PF administration was widely criticized for its handling of the recent strikes by doctors and nurses.