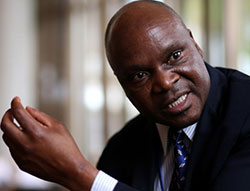 HARARE: Zimbabwe is considering scrapping royalties levied on gold producers in order to boost output, the minister of mines, Walter Chidhakwa has said.
Gold miners currently pay three percent royalties after Finance Minister Patrick Chinamasa lowered the fees to 5 percent from 7 percent in 2015 and to the current level in 2016.
According to the Zimbabwe Revenue Authority (ZIMRA) mining royalties contributed $62,9 million to revenue in 2016. Zimbabwe earned $914 million from 21 tonnes of gold in 2015.
Bullion output in the southern African nation has risen annually since 2008 when it produced three tonnes, its lowest ever to 22 tonnes last year although it is still well below the peak output of 30.2 tonnes achieved in 1999.
Small-scale miners have contributed nearly 40 percent of total output since 2015 when government decriminalized artisanal mining and embarked on an aggressive collection strategy, which saw the country’s sole buyer of gold Fidelity Printers set up buying depots across the country.
Mines and minerals development minister Walter Chidhakwa on Friday evening told a gold producers awards gala that government was considering to removing royalties on gold earnings.
“Government can not whip miners to force them to sell their gold to Fidelity …..but we can offer an incentive,” said Chidhakwa.
“We have been in discussions with the Minister of Finance to see how we can further incentivize miners and we are of the idea that we do away with royalties. Government does not even get much from royalties anyway but as a tax they stifle the miner.”
Gold is Zimbabwe’s main export and, along with tobacco and platinum, accounts for the bulk of the country’s foreign currency earnings.Advertisement