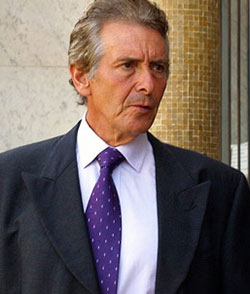 GOVERNMENT is still considering the $50 million rescue package offered to Hwange Colliery Company (HCCL) by shareholder and businessman, Nicholas van Hoogstraten and will only announce its decision next year, the mines minister said on Tuesday.
van Hoogstraten holds 30 percent shares in Zimbabwe’s largest coal mine, the second largest after the Zimbabwe government’s 37.10 percent, and has demanded management control of the company for five years in exchange for the cash.
Hwange appointed the Infrastructure Development Bank of Zimbabwe as the lead financial advisor on the deal with a view to reaching an agreement by November 30.
“We are considering the offer and the permanent secretary is discussing with the board chairman,” Mines Minister, Walter Chidhakwa told The Source.
“Any consideration of such a matter must be exhaustive,” Chidhakwa said.
He said a decision on the deal would be announced early next year.
Hwange is grappling with a $14 million six-month salary backlog and a debt of $160 million.
Under the van Hoogstraten proposal, the capital injection would be formalised and secured through the issue of convertible loan stock with a 10 percent interest rate, a conversion rate of one new $0.25c ordinary share for each $0.50c of loan stock and convertible at the end of the fourth year.
The Government’s 37 percent shareholding would be maintained while debts owed to statutory bodies will be converted into five-year preference shares at a par value of $1 and a five percent interest rate.
Banks owed by the company would receive an immediate 50 percent cash payout.
Other Hwange shareholders include Mittal Steel Africa with 9.76 percent and Messina Investments with 15.09 percent.Advertisement