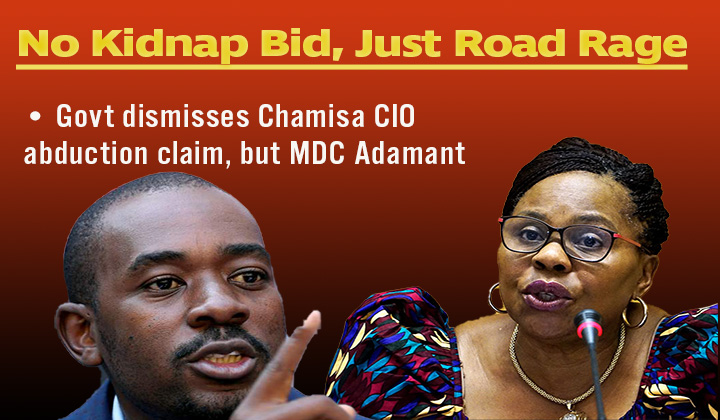 THE government publicly denied claims Sunday that its spy agency had attempted to kidnap main opposition leader Nelson Chamisa as he left a rally in Marondera this weekend.

Information minister Monica Mutsvangwa said the claimed abduction bid was possibly just a case of “road rage”, adding that the individuals involved in the altercation with Chamisa’s motorcade were not intelligence operatives but just ordinary citizens.

Chamisa’s MDC party was however, adamant with national spokesman Jacob Mafume accusing the minister of “misleading the nation”.

The individuals (who tried to kidnap Chamisa) had with them guns, they had blue sirens, and they had communication gadgets that looked like State issued.

“They were working on a plan and  clearly intent on driving (Chamisa) off the road,” said Mafume adding that the party would call a press conference Monday to give more details about the incident.

The MDC tweeted Saturday that “Central Intelligence Organisation (CIO) agents (participated) in a failed attempt to abduct” Chamisa after the Marondera rally.

The post was accompanied by a screen-grab of a video which showed a group of men gathered around an SUV.

The party later said that Chamisa was safe following the alleged incident.

“Government is dismayed at the imputation that state agents would attempt to abduct opposition leaders. That notion is not only false but malicious,” said minister Mutsvangwa said in a statement Sunday.

For the avoidance of any doubt the CIO was not involved in this incident which is now under police investigation.”

Addressing the Marondera rally, Chamisa told supporters that CIO operatives were trailing him everywhere he travelled and round the clock.

The government however said the claimed abduction bid was possibly a “road rage incident”.

According to Mutsvangwa, the would-be abductors were, in fact, ordinary citizens who had since reported the incident to the police.

“The reports filed with police indicate that some people where coming from Marondera, driving behind what they later learnt to be Mr Chamisa’s convoy,” she said.

“Suddenly, the convoy stopped and blocked them from overtaking, they were aggressively confronted and manhandled by members of Mr Chamisa’s entourage including Mr Chamisa who lobbed himself at the back of their vehicle punching and scratching.”

“This could be a road rage incident,” the minister added.

“The government would like categorically state that neither the Security services or any arm of government owns the Toyota Harrier in that video.

“A quick check at the Central Vehicle Registry (CVR) would show the media or any interested parties who the owner of the Toyota Harrier is.

“In any event the Zimbabwe Republic Police (ZRP) is seized with that.”

November 21 will mark the one-year anniversary of former president Robert Mugabe’s resignation following a brief military takeover that was followed by Mnangagwa’s appointment.

Opposition politicians faced frequent harassment and actual violence at the hands of the security forces under Mugabe’s authoritarian rule.

Chamisa’s predecessor Morgan Tsvangirai was detained on numerous occasions and was brutally beaten by police in 2007 when he attempted to stage an anti-government rally in a Harare suburb.

Chamisa, who lost to Mnangagwa in July 30’s presidential polls, claims he was the rightful winner and has staged several victory rallies in recent weeks.

He has also called for a transitional authority to run Zimbabwe and the country to hold a fresh vote.