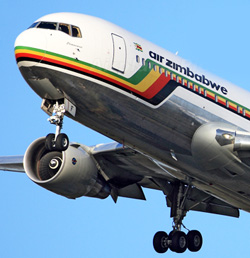 Government Wednesday said it is inviting bids for the purchase of shares in eight parastatals including Air Zimbabwe and Zesa.
This was revealed by deputy finance minister Terence Mukupe who said government sought to close the ever growing budget deficit.
“We are diluting our shareholding in those entities and our shareholding might go to zero percent in some entities,” Terence Mukupe told Reuters news agency.
According to the report, government is also selling off its shareholdings at ZB Holdings and Agribank as well as Zimre Holdings which has operations in several regional countries, among several other entities.
Also, according to Reuters, “Zimbabwe either partly or wholly owns 92 companies, most of which have been making losses for years due to mismanagement, high operating costs and old equipment”.
“In 2016, 38 such parastatals ran losses totalling $270 million, according to a report from the president and cabinet office last October,” the report said.
Among the highly indebted entities is Air Zimbabwe with a more than $300 million debt as well as the National Railways of Zimbabwe.Advertisement