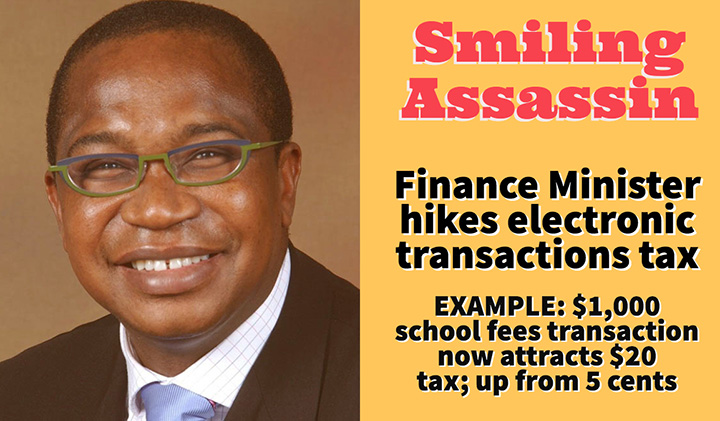 Zimbabwe’s newly appointed Finance and Economic Development Minister Mthuli Ncube has announced a 2 cents per dollar tax on electronic transactions as the country moves to widen its tax base.

While the new tax seems like a downward review, it isn’t as consumer will now be charged on every dollar transacted, whereas in the past it was 5 cents for every transaction, including those above $1.

The new 2c per dollar tax effectively means most Zimbabweans will have to fork out more in tax for every dollar transacted as more than 96% of the transactions currently conducted in the southern African country are electronic.

For instance, whereas Zimbabweans used to pay 5 cents tax for every transaction regardless of the amounts involved whether $100, $500 or $1,000, the new regime means consumers will pay more the bigger the size of the transaction.

Analysts have described the hikes as catastrophic for consumers who are already forking out more on value added tax and other bank charges related to electronic transactions.

“It’s catastrophic for most Zimbabweans, as most of our transactions are now conducted electronically. It’s an increase in costs on all transactions and the consumer will be hurt,” said Walter Mandeya, an analyst with Trigrams Investment.

The latest Reserve Bank of Zimbabwe figures for the half year beginning January to June show electronic transactions done in the country amounted to $64.7bn.

This means if 2 cents is charged on every dollar transacted, government coffers would have swelled by  $1.3bn.

If similar transactions were to be conducted in the second half of the year, the country’s treasury can expect to collect at least $2.5bn for the year from transaction charges alone.

At least $4bn worth of transactions went through Point of Sales machines in retail outlets, which means on top of the 15% value added tax that is charged at POS, most transactions will add another 2% tax charge for every dollar spent at the till.