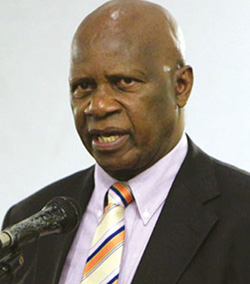 ZIMBABWE started levying a 15 percent value-added tax on basic foodstuffs Wednesday, the government said, dealing a further blow to cash-strapped consumers already battling to survive in an ailing economy.
The tax affects meat and staple foods such as cereals, rice and potatoes.
Other goods listed by the finance ministry include margarine, fish and pork.
The move comes at a time when Zimbabweans are faced with unemployment of over 90 percent and rising levels of poverty.
The country once considered the bread basket of Africa now imports most of its food, after the agricultural sector was brought to its knees by the seizures of white-owned commercial farms under President Robert Mugabe’s administration.
In 2016 the government banned a range of food imports from neighbouring South Africa, in a bid to boost the local market which is battling cash shortages.Advertisement

The VAT announcement was slammed as “anti-people” by the opposition Movement for Democratic Change (MDC), which predicted a sharp increase in food prices.
“This is an anti-people statutory instrument which will make it hard for the poor to afford meat,” party spokesman Obert Gutu told AFP.