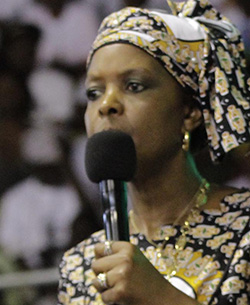 SINGER Grace Jones has suggested that pop stars such as Beyoncé, Rihanna and Miley Cyrus are simply copycats of each other who will inevitably be replaced by newer models.
In her new memoir, the 67 year old prides herself on being a trendsetter for the young generation, whom she claims are purely motivated by money as opposed to individual creativity.
The Pull Up To The Bumper singer has shared her thoughts on the current state of music in her upcoming memoir I’ll Never Write My Memoirs and believes most of the biggest musicians today are lacking individuality.
Jones writes in an extract published by Time Out: “I come from the underground. I am never comfortable in the middle of the stream, flowing in the same direction as everyone else.”
Referring to Flawless singer Beyonce and other stars, she continues: “Trends come along and people say, ‘Follow that trend’.
“There’s a lot of that around at the moment: ‘Be like Sasha Fierce. Be like Miley Cyrus. Be like Rihanna. Be like Lady Gaga. Be like Rita Ora and Sia. Be like Madonna’. I cannot be like them – except to the extent that they are already being like me.
“I have been so copied by those people who have made fortunes that people assume I am that rich. But I did things for the excitement, the dare, the fact that it was new, not for the money, and too many times I was the first, not the beneficiary.”
The I Need A Man singer later appears to mention the music video for Rihanna’s hit single Umbrella in which she writhes around with body paint.
Jones alleges that the creative look was originally her idea although it is possible RiRi was unaware of this and was instead styled by her team.
Jones goes on to reveal that she was once asked to work with a popular singer but refused on the belief that she would not personally benefit from the collaboration.
She writes: “No one could believe that I said no, but I am okay on my own. I am okay not worrying about a new audience. If the f**k don’t feel right, don’t f**k it.”
Referring to the mystery pop star as “Doris”, Jones continued: “The problem with the Dorises and the Nicki Minajs and Mileys is that they reach their goal very quickly.
“There is no long-term vision, and they forget that once you get into that whirlpool then you have to fight the system that solidifies around you in order to keep being the outsider you claim you represent.Advertisement

“There will always be a replacement coming along very soon – a newer version, a crazier version, a louder version. So if you haven’t got a long-term plan, then you are merely a passing phase, the latest trend, yesterday’s event.”
She later adds of “Doris” performing in Las Vegas: “You are in the middle of the road.
“You are really in Vegas wearing the sparkly full-length gown singing to people who are paying to see you but are not really paying attention. If that is what you want, fine, but it’s a road to nowhere.”
The extract concludes with Jones describing artists such as Lady Gaga, Madonna, Katy Perry, Annie Lennox, Rihanna, Miley Cyrus, Kanye West, FKA twigs and “Doris” as her “pupils”.