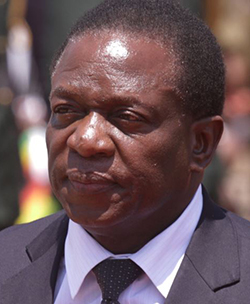 THIS column names Grace Mugabe its Person (some will say plonker) of the Year for 2015.
The award is not about the moral or constitutional propriety of what the First Lady has achieved over the past year. Indeed, we neither celebrate nor approve both the means and the end, but merely acknowledge and recognise what IS.
The leader of the main MDC opposition party has suggested that a reversal of roles has been forced at State House; that the former glamourous but relatively silent presidential consort has risen to become a blatant and public puppeteer of the Head of State and that she is, therefore, effective ruler of this nation. In other words, President Robert Mugabe is now the consort; Grace the sovereign.
But the former premier is being mischievously melodramatic and understandably so; it’s his job to cause grief and disquiet among his rivals.
What has actually happened instead, is however, just as dramatic; or nearly so. It is evident that, after forcing the ouster of then vice president Joice Mujuru around December 2014, Grace concludes 2015 having formally imposed the office of First Lady on the ruling party and the State. More significantly still, she has located said office between the President and his two deputies. Remarkable!
Effectively, Grace has ordered the State and party constitutions re-written to force her accommodation – personally and officially. Previously dismissed as a shrill ignoramus – itself a fatal political error for many in and (now) outside the ruling Zanu PF party – Grace emerges as a formidable political force – one to be reckoned with; and never trifled with either. It might be said that she has shattered the proverbial glass ceiling and you’d expect the women’s movement to take their collective eyelashes off to her; yet they sneer. The means justify the end, surely. No?
With the active connivance of her husband, Grace has disempowered the State and ruling party vice presidents, reducing them to glorified aides she regularly summons to her office where they must take notes as she pontificates. She made the revelation with her characteristic giggle. Sunday Roast shares her mirth and jollity; the image of the famed and supposedly fearsome crocodile attentively listening to Grace, perhaps kneeling even, and taking notes is an unmitigated delight!Advertisement

Forget that she backtracked and claimed the vice presidents act in her husband’s absence while she doesn’t. The acting is inconsequential; Mugabe and Grace go abroad with full executive authority. Neither cabinet nor the politburo meet in their absence. The extent of her coup was revealed at a rally in Masvingo where she explained that the vice presidents were not her seniors in the party and government; only more experienced.
Why this has happened remains unclear but the president has, possibly, decided to rule with, and through his wife, in order to mitigate the limitations forced on him by infirmities that come with age. As one notoriously indisposed to sharing power or delegating responsibilities, the President was never going to allow his two deputies to do more; to be more. But because, at 92 (almost), he now must, of necessity, delegate, he has elected to share power with the one person he thinks he can trust – his wife.
Beyond that however, something bigger brews, threatens. It would appear a succession choice has been made, or forced. At the Zanu PF national conference in Victoria Falls, President Mugabe, in an unprecedented move, attacked war veterans and the serving military and intelligence top brass, accusing them of meddling in the ruling party’s succession politics.
Zimbabweans were necessarily bemused – because war veterans and the military have always meddled in party (Zanu PF) and national politics without suffering presidential reprimand. This time however, they made the misjudgement of meddling AGAINST the President’s wife – hence the public rebuke, with graver consequences likely to follow. Already, and aware of the ill that portends, one verbose and anti-Grace ‘crocolyte’, Chris Mutsvangwa, has suddenly gone mute.
The Generals could only have meddled against the First Lady because they felt she has gone too far, and dangerously so? They must have considered that there has been some mission creep to the project which initially took her to the summit of the Women’s League. They would be alarmed that the President now, clearly, does her bidding. He admitted as much at the December 2014 party conference when she ordered him to stop waffling and get off the podium. In a plea for help that was misread and not understood by the party, Mugabe lamented that he suffered the same abuse at home pretty much all the time.
The ruling party too, is spellbound with the Grace phenomena; which is no mean feat. The First Lady can fart (not literally, of course) all manner of foul winds in their faces and they will collectively and happily inhale the horrid breezes singing ‘munhu wese kuna Amai’. This, by the way, is a party of the brave; cadres who went to war, fully aware they would likely get a bullet between the eyes. They lived rough for years; going for weeks on end smelly and unwashed. And yet, here they are; dazed zombies harangued to complete submission by an upstart who would collapse with horror at the prospect of going a day without a wash.
Endangered croco-lytes

Threatened with expulsion from Zanu PF … Monica and Chris Mutsvangwa