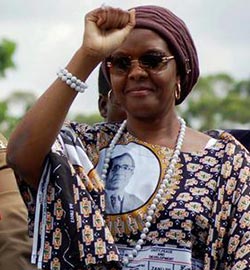 IF I had sufficient political clout to be able to sit with Grace Mugabe I would NOT be sitting and writing this article which I pray she will be able to read. I would have preferred what usually is termed a girls talk. Whilst many people may have an automatic response to want to lynch Grace Mugabe, I just find in her a woman who is being used in a bigger political game in which she has no appreciation of what is actually happening around her and the impact of the political decision she has taken on her future and her children.
There are three main issues that concern me over what I will term “the Grace Pawn Star game”.  The first one is that she seems oblivious to the fact that almost 21 years since Sally Mugabe’s death, she has always been viewed as second wife, a home wrecker and a gold digger. I do speak from personal experience, it is almost impossible that a young woman who marries a much older man can ever be accepted to have done so for legitimate and bonafide reasons.
Ascending to political positions as a wife to a political leader is almost only accepted in circumstances where the wife has been part of the husband’s history of liberation. So it would be folly for Grace Mugabe to compare herself to Sally Mugabe primarily because she is perceived as a late comer to Robert Mugabe’s political life.
Grace only needs to look at the examples of Graca Machel who despite being a politician and powerful individual in her own right, had to understand that the gender dynamics of entering in a marriage with Nelson Mandela despite the divorce still meant that only Winnie Mandela would always remain as the accepted political partner to Nelson Mandela. For all the time that Graca Machel was married to Nelson Mandela, she not once attempted to take any political role in the ANC because she was intelligent enough to understand that basic fact.
The other example was the short lived time of Callista Chimombo, wife to the late Bingu wa Mutharika, although a political activist in her own right, once she entered the marriage institution in which she was seen as a new comer, she failed to claim any political legitimacy. Ironically even with the re-entry of her husband’s brother she continues to be an outsider of that party’s politics. Sadly Callista, is a woman who had built her own political brand, which unfortunately died once she entered into marriage and got buried with her husband’s death.Advertisement

Grace Mugabe’s role of supporting her husband without entering Zanu PF politics is the best strategy of securing both her political and economic interests. She obviously clearly cannot appreciate that those asking her to enter the political mine field are doing it more for themselves than for her.
For the few years that I worked with Robert Mugabe, he has always seemed to be very protective of his family. I do hope that in this instance he can get her to understand that too many odds are stuck against her, and that she is likely to be the biggest victim and loser if she proceeds with this position.
Secondly, it is increasingly clear that Grace Mugabe is a strategic tool in that, given her political naivety, she is the gun used to strike at the other factions and she therefore has already made serious strategic blunders. One of those of blunders is the direct attacks on some of those in the leadership of Zanu PF; in so doing she made the factional politics more complex.
Grace Mugabe’s entry active politics also weakens Robert Mugabe in that over the years his strength has been his ability to NOT be seen to take sides on the factionalism in Zanu PF. Grace Mugabe’s unstrategic attacks on some of the Zanu PF colleagues may therefore force her husband to show his hand on the factional politics and therefore create further complications to the existing divisions.
Whilst the dummy sold by those that are using Grace Mugabe may be that her entrance may ensure that outside her husband she may be able to launch herself as a political leader of the party but that is almost impossible. Firstly, because one of the fundamental principles of Zanu PF is that the leadership of the party is only a preserve of those who participated in the liberation struggle.
Clearly, Grace has no history with the liberation struggle; both in her own capacity or through her family – she cannot claim any name in it. For example, if she were to die today, outside her husband’s decree she is not qualified for hero status according to the criteria that is defined by Zanu PF.
Grace Mugabe is a woman who is being used and abused and it is my sincere hope that, before December, she does take time to reflect before she makes what may be the most fatal mistake of her life. Unlike the stories being thrown at her, she cuts a pathetic figure of a woman who is failing to appreciate that her current position in society does not make her immune to the abuse that everyone else in society is subject to.
I pray that if she does read this article she understands advice that is well meant coming from one sister to another, and if she decides to ignore the advice she can never say one sister did not warn her.
Priscilla Misihairabwi Mushonga is the MDC Secretary General. She writes in her personal capacity and also as a feminist. She can be contacted at pmmushonga@gmail.com