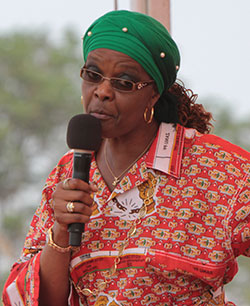 THOSE who recently allowed Grace Mugabe frequent access to the microphone did the nation a great favour by exposing the brainless dwarf that hides behind her well-groomed body. Given her entertaining theatrics and verbal diarrhoea, many people are struggling to find any other description for her other than “fool”. Those who are a bit parsimonious with words prefer to call her “shallow-minded or dull”. In all honesty, she is probably all of these.
In 2004, it is a known fact that there was a cabal that did not want to see Joice Mujuru becoming vice president. She ended up becoming one because Grace’s frail husband, President Mugabe, did everything in his power to ensure Joice Mujuru’s ascendancy to the presidium. In the process, many people were sacrificed particularly provincial chairpersons who were opposed to this elevation.
Patrick Chinamasa survived the chop after he literally went down on his knees asking for pardon. The group’s godfather was demoted and a new ministry, the equivalent of a dumping ground or commissioners’ pool in the uniformed forces, was created for him called Housing and Social Amenities. Those who were behind the Dinyane “coup” were not forgiven for a long time. Jonathan Moyo was consequently fired from the ministry and his partying short was “He who appoints disappoints”. Gushungo hit back “Kane musoro wedamba”.
Grace cannot pretend to have forgotten this in a very short space of ten years. If indeed there was something very sinister about Joice Mujuru making her unsuitable candidate for the vice presidency as we are now told, why didn’t Grace bring it up then? Why did her husband disregard the wishes of the majority of provinces and put his full weight behind somebody so corrupt, an extortionist? For how long have Zimbabweans been complaining about corruption in the highest offices with Mugabe doing literally nothing about it, at times rewarding the corrupt with promotion? Has Grace just heard of the words corruption and extortion now?
At Nathan Shamuyarira’s funeral, Grace’s husband lambasted people that he said were destroying the party from within. We were told that some of them even went to the extent of hiring “Baba Jukwa” as editor for State-owned Sunday Mail. Mugabe made it very clear that he was going to deal decisively with those “weevils” leading Didymus Mutasa to go to town over the threat and thereby adding “gamatox” to the political dictionary. Among those cheering was Grace herself.Advertisement

The subject of Mugabe’s outburst at Shamuyarira’s burial was certainly Jonathan Moyo together with his shrewd godfather who prefers to remain in the background most of the time. Grace did not say anything then. A few days later, Jonathan Moyo had a private meeting with President Mugabe after which the “weevils” started gaining ground while “gamatox” was progressively diluted. For 37 years, this is the same trick Mugabe has used; divide and rule.
The benevolent and surprise give-away of the position of Women’s League boss by Oppah Muchinguri to Grace who has never held any leadership position at any level, happened not long after Jonathan Moyo’s private discussion with Mugabe. There must have been insidious trade-offs in that closed door meeting of which Grace became one of the greatest beneficiaries, at least for now. Conspicuous by dead silence, is Mugabe himself.
Here, we have cunning intellectuals who realised that Joice Mujuru was not going to be an easy push-over at congress while Mugabe wishes to drop dead on the job. They then identified a useful fool to manipulate in order to advance their 10-year-old agenda, obviously taking advantage of Mugabe’s advanced age.
The willing or unsuspecting fool, unfortunately, happens to be the president’s wife. Keeping one senatorial aspirant at bay through a simple legal technicality is part of the grand plan as the guy can easily see through the shenanigans and sound warning bells to the First Family for whom he is a personal banker.
Knowing that at 90, Mugabe’s days are certainly coming to an end, Grace’s intellectual handlers just want a pawn to enable them to cross the line. Once Mugabe is out of the way, she will be sent back to where she rightly belongs, that is in the kitchen and shopping malls. The mission will be complete and her political usefulness will cease forthwith. Here is easy prey dancing in front of calculative vultures and experienced predators. Unfortunately, Grace actually believes that she is too big to be devoured.
“Asi munhu iyeye mumwe chete anolidha nyaya dzefactionalism,” said Grace at the poorly attended Marondera rally. In her feeble mind, she can’t understand that if there is factionalism, then it can’t be led by one person. How can Joice Mujuru or anybody else lead two or more opposing sides simultaneously?
Indeed, when a wolf is desperately starving, she accuses her puppies of smelling like sheep. Joice happens to be that puppy for now. Not new to the game, there is no doubt that Teurairopa Nhongo and “Team Gamatox” are planning their own counter-attack. As the drama escalates, it is the generality of Zimbabweans that suffer the most because nobody is paying any attention to the economy as more and more people lose jobs daily while social services crumble to the ground. This is not what governments are elected to do.
If Grace’s dream is to become the Mama Kadzamira of Zimbabwe, then it’s a nightmare that has come too late. Politics is a contest of ideas not personalities or make-up.
Moses Chamboko is a pro-democracy activist and interim Secretary General for Zimbabweans United for Democracy (ZUNDE). He writes in his personal capacity. You may visit ZUNDE at www.zunde.org or email info@zunde.org