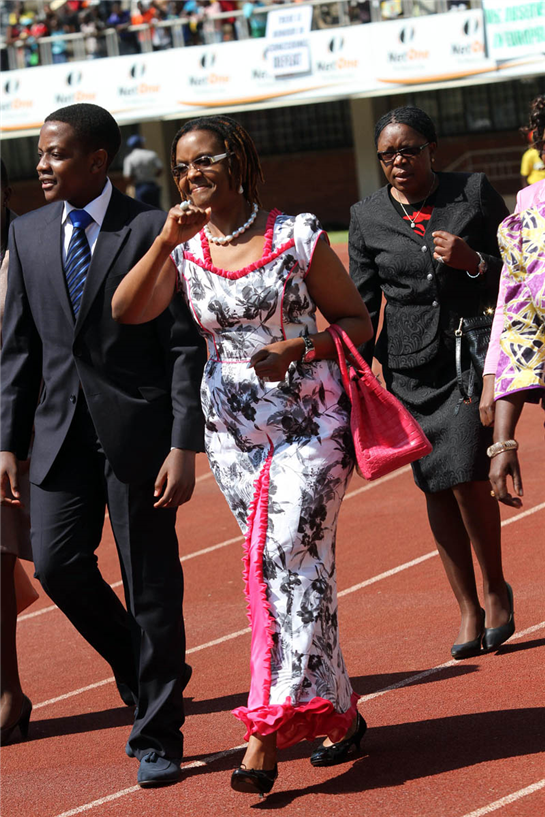 EDITOR’S NOTE: In this article, Dinizulu unravels Grace Mugabe’s rise to power, exploring paths hitherto untrodden in trying to understand this development. He says dismissals of the First Lady as a fogey former typist who got lucky and hitched a President play into her game of smoke and mirrors.
The president’s office in Zimbabwe is the CIO; it does not employ typists per se but ‘intelligence operatives’. Dinizulu invites readers to look back to the 1996 marriage and reconsider who was the hunter – and who was the prey? He reminds readers of this cautionary tale from her family: “We always knew that one day Grace was going to do something great, what exactly we really did not know”.
Admittedly long but worth every minute. We have published the second section of the article under the title ‘Baba Jukwa and the Goblin that went Rogue’.
ONE stubborn theme that has arrested the attention of philosophers and poets from the childhood of humanity to the present era of technologised witchcraft is the theme of illusion and reality. When the political effects of illusions take place, reality remains buried behind clouds of myths and other impressions. When illusions are in force, analysts and commentators of any generation and any setting expend lifetimes of energy pontificating on non-events and non-issues. My reading of the Zimbabwean political climate and the key events and personalities that mark it, indicates that indeed most of what seems to be in the land of our forefathers is actually not, and what appears to be absent is present in amazing magnitudes.
I elect in this short article to treat the issue of the supposed sudden rise of Grace Mugabe to the helm of politics in Zimbabwe, and the intriguing Baba Jukwa saga, to as far as I can demonstrate that, in the main, Zimbabwe is effectively enveloped in political illusions. Most of us in the tribe of analysts and commentators tend to feed our analyses from public opinion and street wisdom instead of shaping public opinion with researched truths and informed opinions. Alex wa Magaisa wrote very recently to lament this situation where a lot of raw rumour and unpolished taxi rank invectives circulate as political knowledge.
Most unfortunately, this dangerous political knowledge guides our political behaviour and shapes our voting trends. For the sheer fear of what illusions and myths can do once they are taken for reality and treated seriously, ancient Athenian philosopher Plato, went as far as to propose that poets, artists and other dealers in fiction and fantasy should be banished from the good society because they are traders in unreality. While history has largely eroded Plato’s argument, and vindicated Aristotle who believed that illusions and imaginative poetics  are actually the  higher reality, we still need to be wary of losing ourselves into  the enterprise of chasing rats with machine guns when the monsters are abound.Advertisement

Talking about the monsters, Zimbabwe appears to be going through monstrous times. As described by Antonio Gramsci, a political interregnum is that period when “the old is dying” but at the same time “the new cannot be born.” During this period, Gramsci said “a great variety of morbid symptoms” and “monsters” tend to “appear.” In Zimbabwe, the old ideas of doing politics and the old people that perpetuate these ideas are not only refusing to retire, to be replaced or pushed aside, or even to die, but have begun presenting themselves and their ideas as the only future. The young and their supposed new ideas that must carry the hopes of the future have collapsed even before the real race for power and control has begun.
Such events as the surprise move ( to many people) by Grace Mugabe to indicate interest in power, and the rise of such headless and tailless entities as the Baba Jukwa phenomenon are just but symptoms of a monstrous political condition that is crying out for understanding.  In monstrous political climates, instead of using powerful language, and beautiful poetry and metaphors to captivate the publics and arrest their hearts and minds, the politicians use the hard language of power to incite violence and propose war. There is a world of difference between powerful language and the language of power. The trouble with Zimbabwe right now, and in short, is that the old is not dying fast enough, the young that was expected to take over is not emerging at all, a panic has arisen, the monsters are emerging and its effectively the Olympics of power politics at play.
‘Don’t Take Photo’: Grace is climbing the ladder