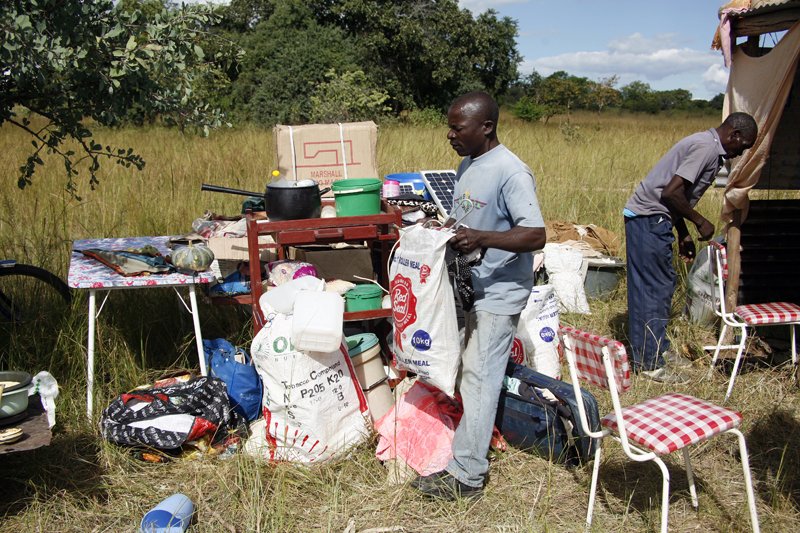 THOUSANDS of villagers in Mazowe, once tormented by then First Lady Grace Mugabe 2016 and 17, now face fresh eviction worries, this time in the hands of the country’s lands ministry which has earmarked their land for redistribution to a suspected top government official.

The close to 600 villagers and their families have been staying at Manzou and Arnold farms since the inception of the chaotic land reform process under then President Robert Mugabe from 2000.

But it 2016, Grace forcibly removed them to pave way for the expansion of her business empire.

The November 2017 ouster of the former President came as a relief to the beleaguered villagers who were able to return their homes with hopes to continue with their normal lives.

However, the villagers seem to be facing fresh eviction threats after they have since been ordered to vacate the property.

The villagers said last week Wednesday, an armed soldier, two police and prisons officers in uniform together with a man they to be a member of the Central Intelligence Organisation (CIO) visited the farm and told them to leave by Friday last week.

Moses Nkomo, lawyer representing the villagers, told NewZimbabwe.com they have strong suspicions the farms were being cleared for reoccupation by a top government official.

“After the visit by the named high powered delegation led by a man who identified himself as Gasa from the Ministry of Lands in Bindura, we met with the farmers who are so shocked by this development in the so called new dispensation,” said Nkomo.

“The man who identified himself as Gasa told the farmers that he did not have a court order and does not need one to evict the farmers and by Friday (last week) they should have vacated the land.

“As I am speaking, the villagers are still there and they are not going anywhere as we are waiting for Gasa’s next action and then we approach the court.”

He added, “We have tried to get hold of him through the landline number which he left with the farmers but the number is always engaged.

“But the question still remains; who can send such a delegation to go and harass villagers if he is not someone with a high position within the government or ruling party Zanu PF.”

The villagers were dumped along the Harare-Mvurwi-Concession road but most of them later found their way back when Mugabe was toppled November last year.

One of the villagers, Peter Dube said people in the area were left depressed by the fresh eviction threats.

“We never expected this especially soon after the demise of the former first family,” Dube said.

“It’s clear that the person who wants the farm is within the Ministry of Lands who knows the history of evictions here.

“We will fight to the bitter end and we want to see how ED is going to handle it so that the whole country and the world see the kind of a man he really is.”

During Mugabe’s rule, court orders to stop the demolishing of the villagers’ homes and evictions by police were ignored.
At one point, the villagers tried to appeal for SADC and the African Union (AU) intervention into their troubles.