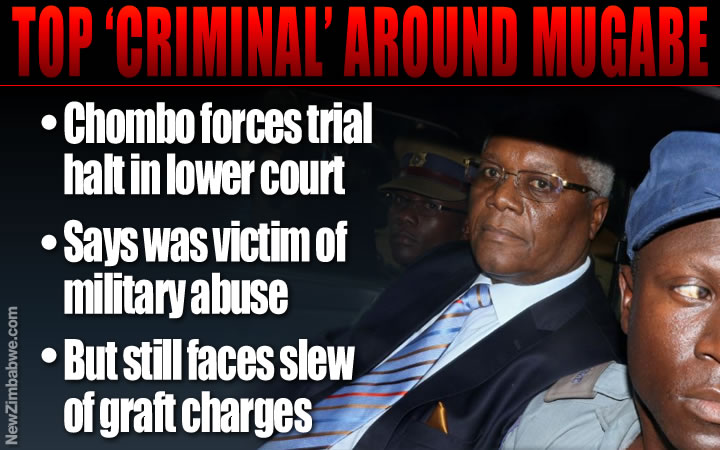 EMBATTLED former finance minister Ignatius Chombo, who has several criminal charges following him, on Wednesday successfully applied for trial postponement arguing he wants the High Court to first decide if his continued prosecution did not violate his rights.

Madhuku told Harare magistrate, Lazini Ncube that proceeding with the trial before a ruling is delivered on Chombo’s application would undermine the administration of justice.

The Harare lawyer argues that criminal prosecution for his client will be invalid considering how his rights were violated between November 15 and 23 last year, when he was kidnapped by suspected state agents at his place of residence in Harare.

“We now want the High Court to determine whether the state is allowed to infringe on a suspect’s rights. The High court has already determined that the accused’s rights were trampled on when, Justice Mushore granted him bail and the judgement is number HH196/2018.

“The victim is entitled to a remedy because where there is violation of rights there should be a remedy and the state should be liable to the damages,” said Madhuku.

Madhuku also blasted the now suspended Prosecutor General (PG) Ray Goba for doing a shoddy job saying he wrote to him after he applied for a stay of criminal trial, expecting he would consent to a postponement as required at law but Goba insisted on the trial.

“I reasonably believed that the PG would consent to a postponement pending High Court’s determination on our application. That is what is naturally expected but he denied that. I expected him to respect the decision by my client to approach the High Court but yesterday (Monday) I received a phone and was told the trial would proceed,” he said adding that this was unethical.

Following this, Chombo, through his lawyer, had to file an urgent chamber application on Tuesday seeking an order by the High Court to stop criminal trials again.

On his initial court appearance Chombo told court of his harrowing experiences at the hands of suspected state security during a period in which he was placed in solitary confinement, glued to one seat while he was blindfolded for a good seven days.

He said he could not see the faces of his abductors who were dressed in camouflage.

Chombo was arrested as soon as his suspected abductors dropped him at his Golden Stairs home in Harare before he was placed on remand for the cases he is now answering to.

He would come to court in leg irons as well as handcuffs.

High Court Judge, Justice Edith Mushore said the matter was peculiar in that the State was denying involvement and knowledge of who had taken Chombo hostage.

Mushore ruled it was clear the state was accountable as it was not in dispute that his abductors were dressed in camouflage and arrested by police before she released him on $5 000 bail.

Chombo was the first minister to be arrested during a militarised operation by the Zimbabwe Defence Forces, where they claimed to be dealing with criminals around former President Robert Mugabe.

He is also being accused of wearing Zanu PF party regalia without authority.

On Wednesday, he was supposed to stand trial for contravening sections of the Prevention of Corruption Act.

In this case he is accused of prejudicing Eddie Pfugari Properties of more than $200 million in a botched land deal.

The magistrate postponed his case to August 2 when he is also expected to appear in court for the trial in which he is being accused of defrauding City of Harare its property worth $900 000.

Chombo will again be on trial on August 8 for allegedly defrauding businessman, Chargan Vithal Rama, of $500 000 in company share ownership transfer deal.