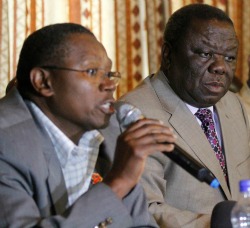 THREE years ago, Zimbabweans United for Democracy (ZUNDE) was established as a global political movement, with the single purpose of forming a united opposition in Zimbabwe.
Just at a time when we thought all was going well and the future was looking better for Zimbabwe politics, our so called “big brother” MDC-T has spent two days in Bulawayo debating how and who not to work with in a united opposition.
The two days were spent in what they called “robust debate”. We wonder what it is anyone can spend two days debating about the unity that the entire nation is demanding from the opposition. Apart from restating the obvious on the state of the nation, their resolutions on forming a coalition are most strange — at best, confusing.
From where the MDC-T stands, their “principles for engagement” with other political parties in a coalition are dependent on several factors, namely

Sharing and subscribing to their vision and values of how they perceive democracy,
A “common ground” with other parties on what they refer to as “a socio-economic transformation agenda”. (I am not certain what that means.)
A shared “National Vision” based on “true ideals of the liberation struggle”
A “deepening and entrenchment of democracy” (whatever that means), that respects the rule of law, freedoms, etc. etc.
A demonstration that the coalition is “people-based” and hence there must be a “people-based pre-election pact” (whatever that means) that minimises the “unknowns by providing an equitable and scientific and objective basis for approaching the election based on known strengths of political leaders and parties nationally and given electoral districts”. (Who knows better than the electorate what strengths political leaders have?)
Fielding presidential and other parliamentary and local government candidates whose past performance give them the best chance of winning. They call this “Institutional Framework of the Coalition” (Only Tsvangirai can boast of past performance as a presidential candidate.)
Agreeing on key policy issues before the election. (Does the MDC-T understand the policy process, particularly that it is people driven, not imposed)
Agreeing with the MDC-T model of the Executive of Vice- presidents, Ministers and Deputies etc. (That smells like a ZANU PF model to me.)

If the MDC-T says that only a candidate from a party that has won in the past should be considered for parliamentary or local government nomination are they saying parties that never participated in elections before are automatically out of the coalition? If that is the case, then it looks like MDC-T intend forming a coalition with themselves.Advertisement

In our considered view, an effective coalition is not about individuals; it is not about positions; it is about the future of our potentially great nation. It is most unfortunate that anyone would impose self-centred pre-conditions on the nature, form and shape of a coalition. If indeed it is a people-driven process, why then is MDC-T deciding for the people without even consulting them?
Anyone can see through this. The MDC-T seems to be terribly uncomfortable with the idea of going into a coalition with any political party that does not conform to its agenda and which they do not consider to be big enough. In order to safeguard their own position MDC-T is imposing preconditions that must be met by any party that wishes to participate in their version of a grand coalition. It is ironic that those who claim to fight for democracy, freedom and equality do not believe in these values themselves.
Not only are the “principles for engagement” confusing, no  potential partner to any pact or coalition should dictate predetermined terms and conditions of engagement and go public about it. We believe it is prudent to treat whatever terms you have set for yourselves as privy to you, only to be discussed whenever you enter negotiations with others.
One cannot help but feel that MDC-T has already decided who it will go into a coalition with, if any at all. Another possibility is they want to go it alone and are finding it difficult to tell the nation that they do not want to unite with the rest of the opposition. They are deluded if they think they can fight ZANU PF alone, or with whoever they believe will be good enough, and win. They have forgotten that for 16 long years they have been so week that they were unable to seize power even when they had won. What a paradox!!
Most if not all opposition political parties were MDC sympathizers at some point. Their diversity represents the level of unhappiness that the MDC-T has caused among the people in recent years. They have more in common with MDC-T than what divides them but somehow MDC-T does not seem to understand this.
It is incumbent on the MDC to heal the divisions in its own ranks by drawing together its splinter groups around the ideals that unite them and by putting aside petty personal rivalries. That is the way to clearly demonstrate to the people that they are truly committed to forming a united opposition.
Failing that, no other opposition movement will go into a coalition with the MDC-T if they do not feel that their contribution will be truly valued. MDC-T is free to go it alone. The other opposition movements are free to arrange a coalition of their own, however that is something the nation has repeatedly discouraged. The people may have to decide whether to vote for unity or to vote for the MDC-T, the stand-alone, who have repeatedly failed to take power when they could have. Let us see what the people decide.
Worse still, it seems that MDC-T is dallying with Joice Mujuru’s Zim PF. If they choose to form a coalition with a party that stinks like ZANU PF, they themselves will stink like ZANU PF. The political sentiment in Zimbabwe today is such that anything that smells like ZANU PF has no place in the people’s hearts. This could turn out to be the biggest mistake MDC-T will live to regret.
Zim PF should be left to stand alone. That will effectively divide the ZANU PF vote which can only be to the advantage of a united opposition.
Recent events in The Gambia demonstrate the effectiveness of a truly united opposition in the struggle for democracy. MDC-T cannot go it alone. To do so would be to risk another horrendous loss as in 2013. The way forward for MDC-T is to demonstrate that they are truly committed to forming a united opposition by healing the divisions in their own ranks and reaching out to other groups who share their democratic ideals. Ultimately it is the politics of ideals, not the politics of personalities that must prevail.
Justice Benjamin Paradza is exiled Judge of the High Court of Zimbabwe and Interim Zunde President