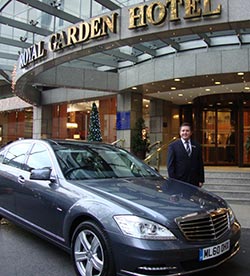 THE prestigious Royal Garden Hotel in London’s affluent Kensington district is the venue for this year’s edition of the Zimbabwe Achievers Awards (ZAA), organisers have announced.
Situated minutes away from world-famous places like Harrods, the Royal Albert Hall and the Natural History Museum, the five-star hotel enjoys spectacular views of Kensington Palace, Kensington Gardens and Hyde Park.
“In keeping with our commitment to provide a premium quality awards show, we’ve gone beyond ourselves this year to raise the bar higher. We believe the achievements of our community deserve to be celebrated in only the best way possible, and this year we have sought to do just that,” ZAA executive director Brian Nyabunze said.
This year’s awards gala will now be held on the more convenient and post-Easter holiday date of the 10th of May. Tickets have now been released for sale exclusively on the Zimachievers.com website for £89.95 each for a limited time only.
A world class ticketing system has been introduced, which allows prospective guests to choose their seats upon purchasing their tickets.
“We’ve packed a mouth-watering combination of great quality experiences into the ticket price,” Nyabunze explained.
“Guests will arrive to a champagne reception and settle down to a sumptuous three-course meal prepared by award-winning executive head chef ,Steve Munkley.”
“They can also expect our unrivalled red carpet photo opportunities and capture glamorous moments to remember. The evening’s entertainment will be provided by top acts that will be unveiled in due course,” Nyabunze added.
But, by far, the most exciting aspect of this year’s awards show is the after-party, which will be held at the same venue until 4 A.M.
“We have previously faced challenges with the after-party but this year we’ve brought it back in-house and guests can look forward to partying in style until the wee hours of morning,” Nyabunze said.
Those driving to the awards show will have access to affordable parking at the hotel as well as in the streets nearby.
The inaugural Zimbabwe Achievers Awards kicked off in 2011 at the state of the art Mermaid Theatre in Blackfriars. Since then, the red carpet event has enjoyed phenomenal growth as a gala dinner at some of London’s leading hotels.Advertisement

The awards are given in recognition of outstanding achievements by Zimbabweans in the UK and elsewhere across a wide range categories stretching from music, sport and media to business and entrepreneurship.