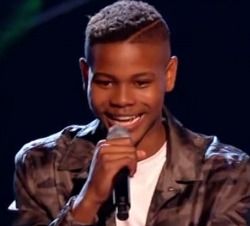 Schoolboy Donel Mangena stunned viewers and the coaches with his cover of Major Lazer and Justin Bieber’s Cold Water – with his boogying granny Nita stealing the show as she unashamedly strutted her stuff on stage.
While all four coaches were vying to have Donel on their team, with Jennifer Hudson telling the student that she would be “willing to get into a fist fight” to ensure she wins him, Donel eventually chose Black Eyed Peas frontman will, i.am to be his mentor.
Viewer flocked to Twitter to hail Donel as this series’s winner, praising him for his electrifying blind audition.
Another added: “Absolutely adored Donel on last night’s The Voice UK, not only is he an incredible singer but his loyalty to his family is amazing.”
A third chipped in: “Just love Donel, he’s the winner – so fresh!”
While a fourth fan claimed: “Here is the winner of The Voice 2018. Everyone can go home now. It’s all over.”
And it seems bookies are willing to get behind the Southampton-based singer, offering solid odds for Donel to scoop the record deal with Polydor.
Bookmakers Coral are offering odds of 9-2 for Donel to be this series’ star, even at this early stage.
A spokesperson for Coral explained: “Donel stole the show on the return of The Voice and immediately attracted a flurry of bets to win the series where he is sure to be in the mix come the live shows.”
Quirky duo RYT, made up of happy couple Tanya and Ryan, also impressed fans, with bets of 10-1 for the loved-up twosome to win.

Elsewhere on The Voice, coach JHud lowered the tone of the singing competition when she dropped a filthy innuendo.
Watching carpenter Jake Benson belt out Julia Michaels’s ‘Issues’, the American Idol alumna and Grammy Award winning performer asked him to hit some of the high notes, telling him she just wanted to “explore his instrument”.
The naughty double-entendre saw will.i.am turn away in fits of giggles, before Tom Jones got in on the act, referring to Jake’s ‘tool’.
Could Jake’s “instrument” be what stops Donel from scooping the crown?
The Voice continues next Saturday at 8pm on ITV.
Advertisement