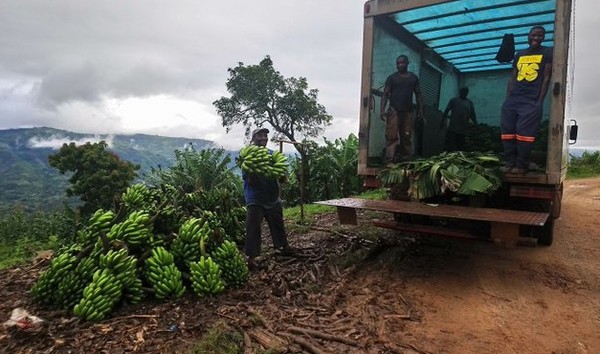 FRUITS growers in Rusitu valley in Chimanimani are being exploited by greedy middlemen who are offering low prices for their produce, only to resale them at much higher prices in towns and cities around the country.

Rusitu valley, which is part of the eastern highlands, a haven for for a variety of fruits, including bananas and other tropical fruits such as pine apples and naartjies.

The fruits are a livelihood for most villagers.

In interviews with Newzimbabwe.com, the fruit growers said banana dealers from as far as Harare, Bulawayo and Beitbridge have literally besieged the mountainous area taking advantage of the farmers desperation for cash.

The dealers are also taking advantage of the area‘s deplorable road network which makes it impossible for the farmers to transport their produce to the cities where they would sale them at much better prices.

“We are being exploited by dealers who are offering to pay as low as US$2 for a bunch of bananas. Some of us are not able to transport the produce to the market because of bad roads and lack of our own transport. Some dealers are now taking advantage of this challenge by bringing their own transport and exploit us,” Gladman Mukondomi, a banana grower in the area, said.

Mukondomi said most of the villagers in the area are now forced to dispose their fruits to the dealers who are now widely referred to as “magumaguma” because the farmers desperately need cash to pay school fees as well as buy other basic goods.

One of the local headmen in the area, John Farai Hlabiso, appealed to government to assist the farmers in securing them lucrative markets in towns and cities.

“We are appealing to the government and other stakeholders to assist us in getting value from our produce. It pains us to see our bananas being sold for a song after all the hard work which farmers put in growing the produce,” said Hlabiso.