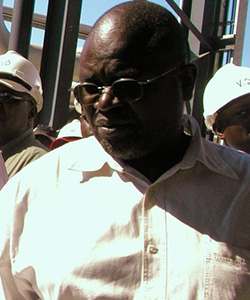 ETHANOL producer Green Fuel is currently producing an average 10MW of electricity, enough to power about 9,000 households, officials have revealed.
Electricity is one of the by-products of ethanol production.
Management said capacity at the company’s Chisumbanje plant in the eastern Manicaland province is currently 18MW but reaching that level depended on increased ethanol production and higher cane throughput.
The company has also had to build the infrastructure needed to deliver the electricity from Chisumbanje to the ZESA substation at Chiredzi, some 60km away.
“An intensive power infrastructure rehabilitation exercise had to be undertaken before the (electricity) offload could begin,” assistant general manager, Raphael Zuze, told NewZimbabwe.com this week.
“Existing transmission lines did not have the required capacity to transmit electricity volumes produced from the factory.
“As such, Green Fuel has had to commence the power evacuation programme with the construction of an additional powerline in order to transmit an initial load of 10MW of electricity into the national grid under phase one.
“The 60 km powerline has cost $2.4million to build and is delivering power to the Mkwasine substation in Chiredzi.”
When fully developed, the half-a-billion dollar Green Fuel project is expected to produce 225 megawatts of electricity – about 10 percent of current national demand which would be enough to power about 215,000 households.
Officials said an upward variation of the ethanol/petrol blending ratio from the current 15 percent would also enable the company to produce even more electricity.
Meanwhile, the company says the second batch of trainees under its Apprenticeship Training Programme have started on-the-job industrial training at the Chisumbanje plant.
The 36 trainees, including 7 women, were drawn from the local Chipinge community.
Management said the programme was designed to help address the skills deficit the country has suffered due to the flight of professionals to other countries in the region and abroad.
“Green Fuel recognised the detrimental impact this (brain drain) was having on the country and decided to work with the Ministry of Higher Education and Tertiary Development to create an apprenticeship programme within the different business units operational within the company.Advertisement

“The programme is just another part of Green Fuel’s social mandate in rural development and is already in its second year, having had a successful intake in 2014,” the company said in a statement.
Assistant general manager, Raphael Zuze, added that the company had come a long way in not only delivering a local fuel solution, but to also ensuring that it is manufactured in Zimbabwe by Zimbabweans.
“Ethanol is a strategic sector (and were are) creating for Zimbabwe the reality that one day the fuel import bill may be totally substituted by a  renewable local product for domestic economic growth,” he said.
“However, even more critical, is the development of a vibrant human capital base with skills sufficient to steer the sector into regional markets.
“Machines without skilled personnel cannot achieve the vision we all yearn for – which is a vibrant economy underpinned by massive industrial growth in the context of the guiding national blueprint – ZimAsset.”