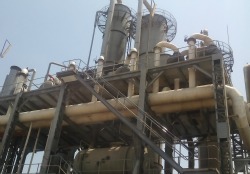 CHISUMBANJE: Ethanol producer, Green Fuel has responded to the country’s brain drain by embarking on an apprenticeship training programme.
The first intake commenced in 2014 with 32 students and the second intake has 36 students and the training runs for four years.
There are seven females in the project.
Green Fuel area training manager Vincent Moyo said the apprenticeship programme was a response to the huge brain drain that is affecting the country.
He said Green Fuel has joined hands with the ministry of higher education and tertiary development to create an apprenticeship program within the different business units operational within the company.
The units include mill operations, agricultural services, harvesting operations and logistics services.
“We have tried to encompass all the students from the country.
“Initially we only catered for those from Chipinge. This time around we have 13 from Chipinge district, 25 from the other parts in Manicaland and 10 others from across the country.
“We blended them though we had earmarked the program for the locals.
“Right now, our focus is on the growth of the business; we have moved slightly to include multi-skills,” Moyo said.
The apprentices will be exposed to trades like fitting, machining,  instrumentation and control techs; electrical power engineering; mill-writing (multi-skilled); boiler making; diesel plant fitting; motor mechanics; automobile electricians and motor cycle mechanics.
It is anticipated that the apprentices will attend colleges of their choice in January 2016.
Moyo said Green Fuel was the first company to introduce millwrights training where apprentices will undergo training in various trades.
“We are the first company to introduce the millwrights programme. If you go to other mines they do not have this program.
“We are saying it is pointless to hire a fitter just to join three electrical wires from Harare, it is better to have a millwright, as this will be costly,” said Moyo.
Green Fuel is the first large-scale ethanol producing factory in Africa, manufacturing anhydrous ethanol from sugarcane to supply the region with a clean, efficient and renewable fuel source.
The factory has the capacity to produce up to 120 million litres of ethanol per year as well as over 86MW of green, renewable power.Advertisement

There are currently 6,000 hectares of sugar cane in the ground at Chisumbanje and 3, 500 hectares in Middle Sabi.
In addition, plans are in place to incorporate the local A2 farmers (approximately 5, 000 hectares) and 47 leased farmers into the project in order to build a second ethanol plant in the area.