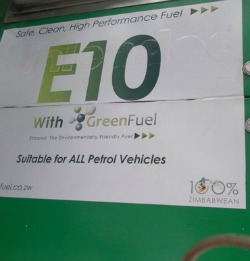 GREEN Fuel says it has lost $10 million worth of ethanol and power after the Zimbabwe National Water Authority (Zinwa) cut water supplies to its Chisumbanje ethanol plant for two months over a $7,3 million debt.
Zinwa cut the water supplies to Green Fuel in March last year after Green Fuel investment vehicles Macdom Chisumbanje and Ratings Chisumbanje accumulated $4,357 million and $2,952 million respectively.
Macdom and Rating Investment are the private companies that partnered the state entity, Arda to form Green Fuel, which owns the Chisumbanje plant.
Green Fuel’s Billy Rautenbach told Manicaland Provincial Affairs Minister Mandiitawepi Chimene who toured the plant along with Joint Operations Command (JOC) service chiefs and heads of government departments that although the matter was resolved, the ethanol plant is yet to recover from the forced shut down.
“Can you imagine Minister? The Zinwa manager (drove) his Prado all the way from Mutare to come and cut water here (at Chisumbanje). Because of that we lost approximately $10 million worth of ethanol and power,” Rautenbach said.
Green Fuel, which has 9,000 hectares of sugarcane plantations, produces approximately 220,000 litres of ethanol and 10 megawatts of electricity daily.
Rautenbach said the plant is designed to run without any interruptions but continues to be affected by erratic water and power cuts.
Operational difficulties during the tenure of the inclusive government — which ran between 2009 and 2013 — forced the company to shut down for 18 months.
The business tycoon said though the plant is now running at 50 percent capacity it is yet to recover financially from the setbacks.
“We were blocked by the previous minister of energy (Elton Mangoma) for two years during the inclusive government. For that time we were not allowed to produce ethanol, not allowed to employ people, not allowed to export power.
“So some of these elements are now coming back to haunt us, this is why we have been struggling to pay our worker’s salaries and are a little behind in our community development,” Rautenbach said.
Rautenbach indicated that plans are underway to establish the second ethanol plant in Middle Sabi but said such a development could only go ahead if investors are guaranteed of political peace and stability.Advertisement