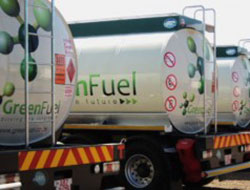 GREEN Fuel plans to set up four new ethanol plants and boost output to 1.5 billion litres annually by 2018, according to the company’s investment blueprint.
Zimbabwe last week increased mandatory blending of fuel to 15 percent and plans to raise it to 20 percent by April next year, increasing the demand for ethanol. The move is seen saving the country millions in fuel imports.
The company in November announced a $500 million investment, which includes the construction of Kondo Dam, envisaged to become the biggest inland dam in Manicaland in 2015 as well as expanding its irrigation area.
According to the plan, the company would increase its sugarcane plantations nearly four times to 46 000 hectares, from the current 9 500 ha. This would boost output to 1.5 billion litres of ethanol annually.
Green Fuel currently produces 220 000 litres daily, with plans to increase it to 250 000 by December end. It also plans to start exporting the ethanol.
The existing Chisumbanje plantations will be expanded to 36 000ha while an additional 10 000ha will be at Middle Sabi.
It also plans to boost its power generating capacity to 120 megawatts from the current 18MW when at full capacity.
Green Fuel is a joint venture between the Zimbabwe government’s Agricultural and Rural Development Authority (Arda) and Macdom and Ratings Investments owned by Billy Rautenbach.Advertisement