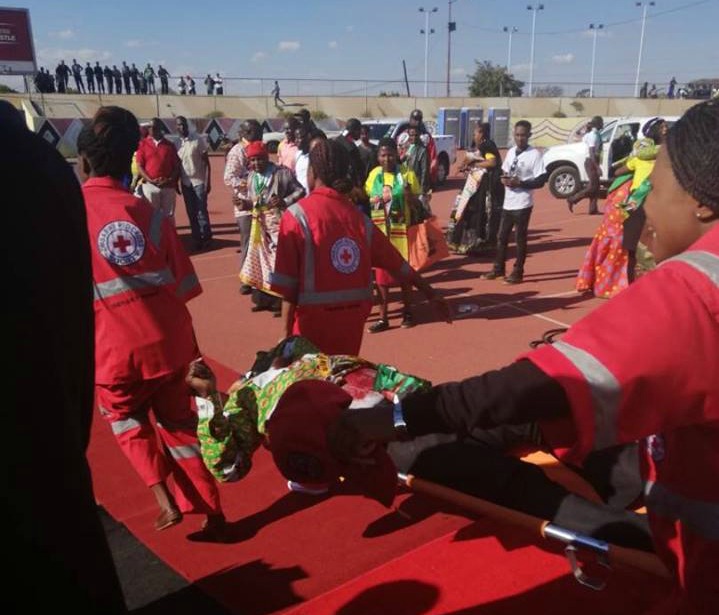 TWO men identified as Douglas Musekiwa and John Zulu have been charged for the bombing at a Zanu PF rally that left two people dead and nearly 50 others including Vice President Kembo Mohadi injured.

They are both from Bulawayo a contrast from president Mnangagwa’s claims that his would be assassins were from outside the province.

This was revealed in police documents in which authorities were Saturday seeking legal authority for the two’s further detention.

According to the application made by one Chief Superintendent P R Moyo of Bulawayo Central Police Station, Musekiwa and Zulu are being charged with insurgency, banditry, sabotage or terrorism.

“Douglas Musekiwa arrested without a warrant and that from information available to me there are reasonable grounds of suspicion to the effect that he has committed the offence of c/s 23(c) (i) (ii) of the Criminal Law Codification and Reform Act Chapter 9:23. Insurgency, banditry, sabotage or terrorism and thus apply for a warrant for his further detention,” the police said.

A warrant for further detention is issued under Section 37 of the Criminal Procedure and Evidence Act.

Reports from Bulawayo claimed Musekiwa and Zulu were being held by the Military Intelligence Department in the country’s second largest city and are now due to appear in court on Monday after the warrant for further detention was granted by a magistrate Gladmore Mushove behind closed doors at the Western Commonage Courts.

Western Commonage is precisely a stone’s throw from the White City Stadium where the blast occurred.

President Emmerson Mnangagwa’s government was left reeling after a grenade explosion launched from a crowd he had just addressed exploded as he and his top lieutenants including Mohadi, Vice President Constantino Chiwenga, Water Minister Oppah Muchinguri were leaving the stadium.

The grenade missed Mnangagwa by seconds but Mohadi, Chiwenga’s wife Mary and Muchinguri as well as scores of aides and hangers on were not so lucky.

Two aides died of their wounds last week with Mnangagwa pointing fingers at his adversaries in the Generation 40 faction of Zanu PF as the perpetrators however admitting he had no evidence as yet.

The G40 faction was known to be led by former president Robert Mugabe’s wife Grace.  Among its top members were or are former ministers Jonathan Moyo, Saviour Kasukuwere and Patrick Zhuwao.

Mnangagwa came to power on the back of a military coup in November last year that forced Mugabe to dramatically resign under duress from the army then led by Chiwenga.