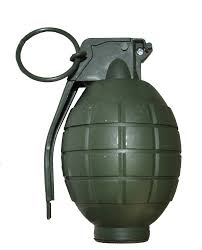 A three year old boy died upon admission at Silobela Hospital while his brother is battling for life at Gweru General hospital after a grenade blew up on the duo in Muchogwe area Silobela, Tuesday.

Speaking to this publication in an interview the distressed father of the deceased Esius Dube said he didn’t know where his minor son had picked up the grenade that killed him and in the process seriously injuring his 20 year old disabled sibling Senzo.

“On the tragic day I had taken my cattle to the pastures leaving my now deceased minor son in the company of his 20 year old brother who is disabled.

“I don’t know where the now deceased might have picked the grenade since I wasn’t around,” Dube said as he struggled to control emotions.

He said he was notified of the tragedy by a fellow villager.

“I only came to know about the tragedy after I had been notified by a fellow villager that’s when I rushed home to find my sons in a bad shape. We rushed them to the hospital where the minor died upon admission whilst the older one had to be rushed to Gweru Hospital,” he said.

The deceased was laid to rest on Wednesday.

Senzo had his right side mangled and his hand blown up.

“I am really distressed by this tragedy. I am feeling sad that I lost my son, and my older one who is already living with a disability. I have been taking care of these children on my own,” Dube told NewZimbabwe.com.

“The event is a tragedy. I wasn’t around when the tragedy occurred but I gathered from the village head that the child picked the grenade in the bush and brought it home. He started playing with it and the older child then removed the pin and it exploded seriously injuring the children. One died at Silobela whilst another one is in a critical condition in Gweru,” Mpofu said.

The law maker added that last month, another grenade was picked in another village of Silobela.

“Last month another grenade was picked in a nearby village. Fortunately the army engineers deposed it before anyone was hurt.

“We need an awareness campaign in the area since it seems like there are still some war objects lying around in the constituency,” Mpofu said.