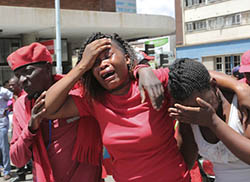 HUNDREDS of supporters thronged the MDC-T’s Harvest House head office Thursday in an outpouring of grief following the death of party leader Morgan Tsvangirai.
The 65-year-old veteran trade unionist and veteran opposition leader succumbed to colon cancer in a South African hospital Wednesday evening after battling the illness for about two years.
Pain, disbelief and despair was evident among supporters who started gathering around Harvest House in central Harare from as early as 7am. Some youths had spent the rest of Wednesday night at the party headquarters after news of Tsvangirai’s passing broke.
Clad in party regalia, many wailed uncontrollably; others hugged and consoled each other over a tragedy that plunged the country’s biggest opposition party into uncertainty ahead of crunch elections this year.
In other scenes, the elderly, unable to march and dance like their youthful counterparts, sat on the tarmac sobbing while party legislator Thabita Khumalo was rushed to hospital after fainting.

Those who spoke to newzimbabwe.com poured their hearts out, describing how they loved Tsvangirai and how they had hoped he would complete the democratic process he started in 1999 when the party was formed.
“We are lost without this great man. It is so painful that he will not be available to take us to Canaan,” said one Ms Chiri.
Another woman said she accepted Tsvangirai’s death because he was in pain and needed to rest.
“Our president did his best. He played his part. He sacrificed everything he had for us Zimbabweans,” she said.
“My concern is our future; we are hearing that our top leadership is having problems. I think we need people who have worked for the party to lead us.”
“If they continue fighting we will leave them and join other parties. I will either vote for Mai Mujuru or Emmerson Mnangagwa,” said Trish Muza from Warren Park D, Harare.
An elderly woman said she Tsvangirai’s death had come at the worst possible time for the party.
“No one can stop death, but the timing is wrong. I just wanted our president to lead us in the elections for this 2018. I am devastated by this loss. Zimbabwe will never get an opportunity to be liberated again,” said Prisca Zvavamwe from Greendale.Advertisement