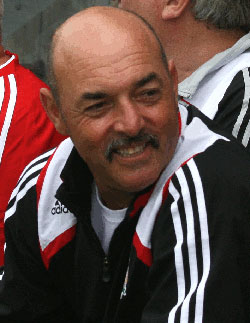 FORMER Highlanders, Liverpool and Zimbabwe goalkeeper Bruce Grobbelaar will not be travelling to Zimbabwe for the high-profile match between Dynamos and Highlanders at Barbourfields Stadium on Sunday.
NewZimbabwe.com had been advised that the jungle man who played for Bulawayo giants Highlanders between 1973 and 1974 was one of the club legends expected for the match.
However, the former goalkeeper’s advisor Calvin Adano that Grobbelaar, who was in Liverpool last week, has no plans to travel to Zimbabwe.
The match has been organised as part of celebrations to mark the Bulawayo club’s 90th anniversary and Grobbelaar could take part in the match.
Dynamos see this match as an opportunity to appease their fans following a largely disappointing campaign which saw them managing only a fifth-place finish.
DeMbare’s disastrous campaign has been attributed to their ill-advised decision to experiment with Portuguese coach Paulo Jorge Silva.
The Glamour Boys, for the first time in more than a decade lost to old foes Highlanders in a league match under the Portuguese’s watch this campaign.
The last time Highlanders had beaten Dynamos was way back in 2006 when they won back to back championship under the guidance of Methembe Ndlovu.
Dynamos also lost to bitter city rivals Caps United for the first time in seven years with the Portuguese mentor in charge.
Caps had last been Dynamos in a league match in April 2009 when a Nyasha Mushekwi double powered the Green Machine to a memorable victory.Advertisement