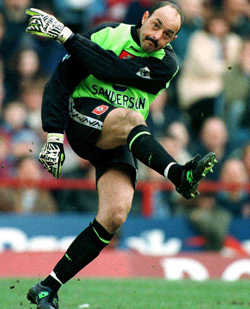 WARRIORS and Liverpool legend Bruce Grobbelaar has revealed that he was offered a cow, goat and sheep as signing on fees by Highlanders.
Grobbelaar played for the Bulawayo giants in the 1973 and 1974 seasons and later went on to enjoy 13 seasons at Anfield. The 56-year-old revealed the news in a book, Red Machine which detailed the Liverpool Boot Room.
“They offered me a cow, a goat and a sheep. Then the second question was whether we wanted them alive or to collect them at the abattoir,” Grobbelaar said.
“We took the goat alive and the other two dead. My mum went with me to pick them up and for the first time genuinely started to talk with the blacks. She realised they were just as normal as us.”
The Jungleman, as he was fondly refereed to, fought in the Bush war against black Zimbabweans in the 1975 in a period which disrupted his football career.
“How can I forget or forgive myself for killing a fellow human being, even if it was in a war? I still have nightmares about it. Everything else in life seems insignificant compared to my years in the forces,” he said.
After a short stint in Canada at Vancouver Whitecaps, Grobbelaar went on to enjoy a lengthy spell at Liverpool where some of his achievements was winning the European Cup which is now referred to as the Uefa Champions League.Advertisement