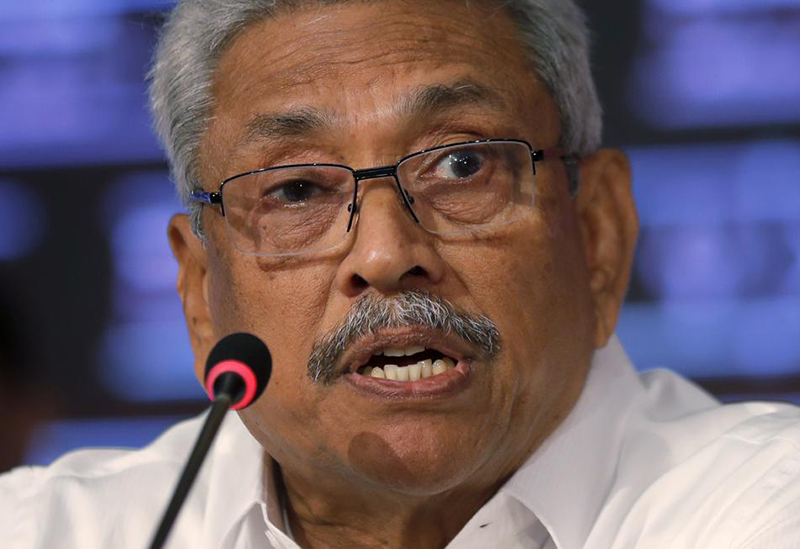 COLOMBO: A rights group gathering evidence on Sri Lanka’s alleged rights abuses said it filed a criminal complaint with Singapore’s Attorney General, seeking to arrest an ex-Sri Lankan president for his role in war crimes alleged to have been committed during the island nation’s civil war that ended more than a decade ago.

Lawyers from the International Truth and Justice Project — an evidence-gathering organization administered by a South Africa-based nonprofit foundation — filed the complaint, requesting the immediate arrest of ex-Sri Lankan president Gotabaya Rajapaksa for his role as the secretary of defense during Sri Lanka’s civil war, which ended in 2009, the group said in a release on Sunday.

Rajapaksa is believed to be living in Singapore after fleeing from Sri Lanka due to months of massive protests against him over the country’s economic meltdown. Rajapaksa fled the country in mid-July after angry Sri Lankan protesters stormed his residence. He first went to nearby Maldives and then flew to Singapore.

The group said “the 63-page complaint argues that Rajapaksa committed grave breaches of the Geneva Conventions during the civil war in 2009 when he was secretary of defence and that these are crimes subject to domestic prosecution in Singapore under universal jurisdiction.”

Rajapaksa was one of the most powerful officials — holding title of secretary to the ministry of defense — in the administration of his elder brother president Mahinda Rajapaksa, who ruled Sri Lanka from 2005 to 2015.

He became Sri Lanka’s president in 2019 but had to flee in mid-July due to public protest over his failure to resolve an unprecedented economic crisis that has dealt a severe blow to the livelihood of many Sri Lankans.

“The economic meltdown has seen the government collapse but the crisis in Sri Lanka is really linked to structural impunity for serious international crimes going back three decades or more,” said the ITJP’s executive director, Yasmin Sooka.

“This complaint recognizes that it’s not just about corruption and economic mismanagement but also accountability for mass atrocity crimes,” she added.

Sri Lanka’s civil war killed 100,000 people, according to conservative United Nations estimates. The actual number is believed to be much higher. A report from a U.N. panel of experts said at least 40,000 ethnic minority Tamil civilians were killed in the final months of the fighting alone.

After Rajapaksa fled the country, the prime minister, Ranil Wickremesinghe, became the acting president and last week, lawmakers in Sri Lanka’s 225-member parliament elected Wickremesinghe to serve as president for the remaining period of Rajapaksa’s tenure. Wickremesinghe was sworn in last week.

Sri Lankans have taken to the streets for months to demand their top leaders step down to take responsibility for the economic chaos that has left the nation’s 22 million people struggling with shortages of essentials, including medicine, fuel and food.

Wickremesinghe also has drawn their ire as a perceived Rajapaksa surrogate. The protesters accuse Rajapaksa and his powerful family of siphoning money from government coffers and of hastening the country’s collapse by mismanaging the economy. The family has denied the corruption allegations, but the former president acknowledged that some of his policies contributed to Sri Lanka’s crisis.

The political turmoil has threatened efforts to seek rescue from the International Monetary Fund. Still, earlier this week, Wickremesinghe said bailout talks were nearing a conclusion.

The head of the IMF, Kristalina Georgieva, told the Japanese financial magazine Nikkei Asia this week that the IMF hopes for a deal “as quickly as possible.”