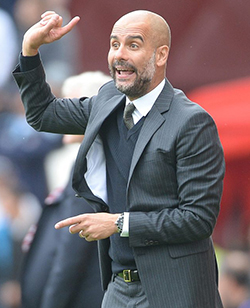 UK: Manchester City manager Pep Guardiola denied suggestions his team’s 4-0 loss to Barcelona was the worst of his career.
A Lionel Messi hat-trick and Neymar strike saw Barca to a resounding win in the Champions League on Wednesday.
Claudio Bravo’s red card early in the second half, with City trailing 1-0, proved particularly costly, while Jeremy Mathieu was sent off late for Barca.
Guardiola, however, denied it was his worst loss, pointing to a 4-0 defeat suffered against Real Madrid while he was at Bayern Munich in 2014.
“The worst defeat of my career was with Bayern against Madrid,” he said, via AS.
It was the whole situation and the mistakes I made with the starting line-up.
Guardiola felt his team created enough opportunities to get on the scoresheet, but he praised Barca’s quality.
“Last time with Bayern [in 2014] we didn’t create chances but today we did, we created chances to score one or two goals,” he said.
“But Barca can punish you, they have a lot of quality. We controlled, except the goal.”Advertisement