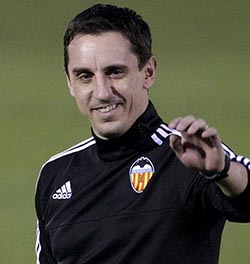 MANCHESTER City manager Pep Guardiola dismissed former Manchester United captain Gary Neville’s fleeting coaching career and sarcastically labelled him a “prestigious pundit” in response to criticism from the Sky Sports analyst.
Neville labelled Guardiola’s decision to name only six substitutes for last weekend’s 1-1 Premier League draw at Burnley due to a spiralling injury crisis as “a joke”.
Also an ex-England coach, Neville believes an opportunity should have been given to one of City’s many promising academy prospects.
“If you’re the academy or reserve team manager at Manchester City, you must think: ‘I’m wasting my time,’” added Neville.
Guardiola had already defended his decision by saying that he could not pick a player from City’s elite development squad as they had faced a game on the Friday night.
But also took a fresh dig at Neville by making a disparaging reference to his disastrous four-month spell as manager of Valencia in 2016.
“This guy, the pundit, he has to know my job is serious. It’s not a joke, never is it a joke. It’s so serious. And he should know that because he was a manager – for a short time.”
However, Guardiola refused to say he could refuse to name a full compliment of subs again in coming weeks.
“Management is not a book where every time you do the same things,” added the Catalan.
“It’s not a book where you have to follow the rules. Sometimes I say: ‘OK, I take that decision.’
“And of course the prestigious pundit can say whatever he wants. But I take the decisions.”
NO INJURY PROTEST
Many pundits, including Neville and former England captain Alan Shearer, interpreted Guardiola’s decision as a protest against a number of dangerous challenges made on City players during recent matches.
Leroy Sane was ruled out until mid-March after his ankle ligaments were damaged by a wild tackle from Joe Bennett during City’s FA Cup fourth-round win at Cardiff on January 28, while Kevin de Bruyne and Brahim Diaz were on the receiving end of bad challenges as West Brom were beaten in the Premier League three days later.
Guardiola played down that suggestion, adding that in his decade-long coaching career he had always previously named a full bench.
As well as Sane, Guardiola was missing Gabriel Jesus, David Silva, John Stones, Benjamin Mendy and Fabian Delph for the trip to Turf Moor.Advertisement

“It was the first time in my life that it had happened, but all of the players were injured believe me.”
Guardiola, meanwhile, said that City should not bear any responsibility for Riyad Mahrez’s fallout with Leicester after a move to the Etihad Stadium fell through in late January.
Mahrez remains unlikely to be involved when Leicester travel to face Guardiola’s men on Saturday having only returned to training on Friday for the first time since January 30, when City’s reported £50 million plus a player valued at £15 million offer for the Algerian was rejected.
“In all transfers, the clubs call the clubs, it’s simple like that.
“After that we are not involved in absolutely anything. It’s a decision for the player and the club, not Manchester City.”