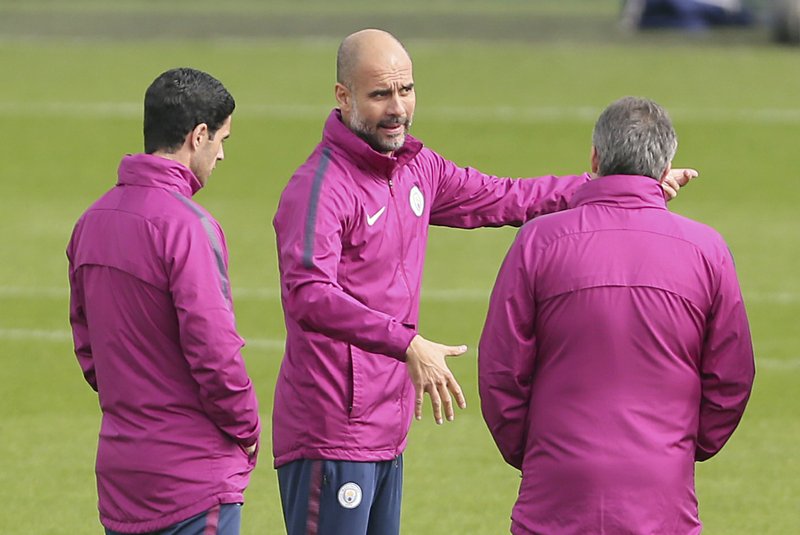 MANCHESTER, England (AP) — To cap a frenetic decade coaching at the pinnacle of soccer, Pep Guardiola is weeks away from becoming a title-winner in a third country.

The demanding Guardiola won’t be satisfied with lifting the English Premier League trophy for the first time. The Manchester City manager knows the silverware he should be delivering.

“We need titles in Europe,” he said on Monday, a day before the Champions League quarterfinal second leg against Liverpool. “It’s so complicated but you need nights that make the people understand it.”

Complicated because, however much City’s ownership and manager crave a first European Cup, the fans don’t seem to have as much affection for the Champions League. That will be clear when jeers drown out the competition anthem on Tuesday. Four years on, fans are still aggrieved that UEFA punished City for a bout of heavy spending to replenish the squad to enable the team to break into the European elite.

City has yet to get past the semifinals.

Reaching that stage even is complicated this season after losing last week’s quarterfinal first leg at Liverpool 3-0.

“A perfect game,” is what Guardiola said is required against Juergen Klopp’s side. “What you have to do is an emotional game.”

Without cranking up the pressure too much on the players.

“We have to be clinical,” Guardiola said, “and if we are not clinical then move on to the next one.”

But the prospects of a recovery might be complicated if the players are still demoralized after collapsing to Manchester United on Saturday: A 2-0 halftime lead became a 3-2 loss. It denied Guardiola the chance to clinch the Premier League at the earliest stage.

Guardiola will be hoping there’s no lingering psychological impact.

But even if the quarterfinal isn’t turned around, the Catalan won’t see the campaign as a write-off.

“If we are not able to do it, it will be a good lesson for the future,” Guardiola said, “because we are not here for just a few months, but for a long period, especially the players.

“We are going to see it’s a good test, football like life is a challenge. Like life, we are happy to handle it.”

It’s why Guardiola isn’t tearing into his players — publicly at least — for messing up the first leg and the derby.

“Amazing,” was midfielder Fernandinho’s verdict on Guardiola’s response to the setbacks.

“Even at 2-3 the reaction from my players was outstanding,” Guardiola said. “There are always things to improve. What happened on Saturday will not change my opinion, about the season or what we did on Saturday because my team did an extraordinary game.”

The message to the players: Hold your heads up high.

“I’m delighted to lose the way we lose against United,” Guardiola said. “I don’t want to lose and we were sad but we have six more chances. The way we played was outstanding. So happy.”

While expectations at City have been raised by the level of spending in the decade under Abu Dhabi ownership, this is a club with limited success before the transformational takeover in 2008. City has already won more domestic championships since then — two — than in the previous century.

City’s only European title was in the now-defunct European Cup Winners’ Cup in 1970. What City lacks and neighbor Manchester United has won three times is the biggest prize of them all: The European Cup.

Guardiola picked up the trophy twice at Barcelona but couldn’t replicate the success at Bayern Munich before being hired by City in 2016.

“For the big clubs you need a lot of time but hopefully we can do it. Maybe next year or maybe the next one.”