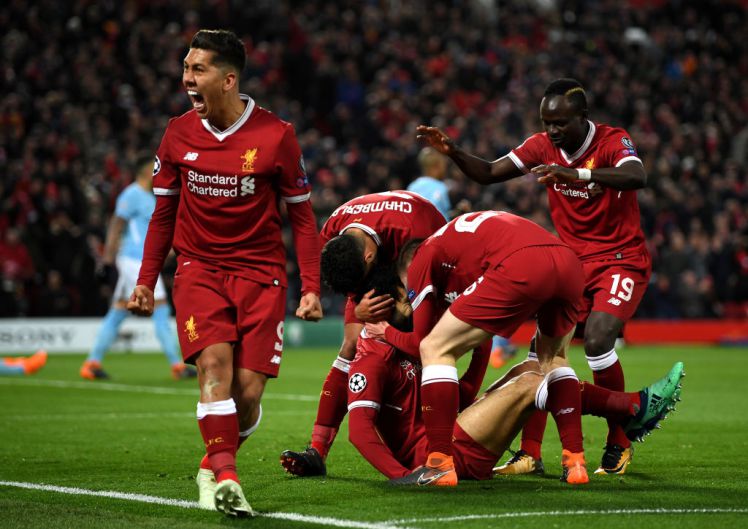 Mohamed Salah ensured Liverpool’s return to the Champions League semi-finals for the first time in a decade as a 2-1 win at the Etihad Stadium on Wednesday took them through 5-1 on aggregate and ended Manchester City’s European dream for another season.

On a night of high frustration for free-spending City, manager Pep Guardiola was sent off at half-time for taking his furious protests towards Spanish referee Antonio Mateu Lahoz too far.

City led the quarter-final, second leg 1-0 on the night at that stage after Gabriel Jesus’s second-minute opener, but the hosts felt aggrieved after Leroy Sane had a second goal wrongly disallowed just before the break.

Salah ensured there was to be no stunning comeback when he coolly chipped home his 39th goal of the season 11 minutes into the second half before Roberto Firmino sealed a comprehensive aggregate triumph for the five-time winners.

Guardiola admitted beforehand that his side needed the “perfect” performance and the hosts got the perfect start as they opened the scoring after just 117 seconds.

Liverpool were unhappy at Mateu Lahoz in what was to be the start of a controversial night for the Spaniard when Virgil van Dijk claimed he had been pushed by Raheem Sterling in the lead-up to the goal.

The referee was unmoved, though, and with the Dutchman out of position, Fernandinho’s through ball found Sterling and his low cross was swept home by Jesus.

Liverpool fans would have been forgiven if memories of their 5-0 defeat at the Etihad Stadium earlier this season came flooding back.

City were helped signficantly that September afternoon by a first-half red card for Sadio Mane and the home fans were screaming for the Senegalese to be dismissed again on 14 minutes for a late challenge on Nicolas Otamendi.

However, Mateu Lahoz settled for a yellow card and a booking for City goalkeeper Ederson, who rushed from his goal to push Mane persistently in retaliation.

Salah had been an injury doubt after limping off in the first leg, but Liverpool were unable to spring the Egyptian free in the first 45 minutes as City peppered the visitors’ box with crosses without finding the final touch.

Bernardo Silva saw a deflected effort spin just wide and then rattled the post with a deflected long-range strike.

The turning point came seconds later when Sane turned into an empty net after Loris Karius’s punch came back off his own player James Milner.

Mateu Lahoz wrongly ruled the goal out for offside, sparking City and, in particular, Guardiola’s anger.

Liverpool could have delivered the knockout blow even before the break had Alex Oxlade-Chamberlain managed to maintain his balance instead of firing high and wide after rounding Ederson.

Guardiola ran onto the field to pull his protesting players away from the official before embarking on his own rant at Mateu Lahoz that saw him watch the second half from the stands.

City understandably failed to maintain the intensity of their first-half display in a third huge game in six days after also blowing the chance to win the Premier League in a thrilling 3-2 Manchester derby defeat on Saturday.

Unsurprisingly it was Salah who got the decisive away goal and in some style.

Just like his opener in the first leg, Salah followed up after Ederson had denied Mane with a wonderfully-judged chipped finish past the despairing Otamendi in the 56th minute.

City were condemned to a third straight defeat for the first time in Guardiola’s near two-year reign 13 minutes from time when Otamendi was caught in possession and Firmino slotted in off the far post to the delight of the Liverpool fans gathered behind Ederson’s goal.