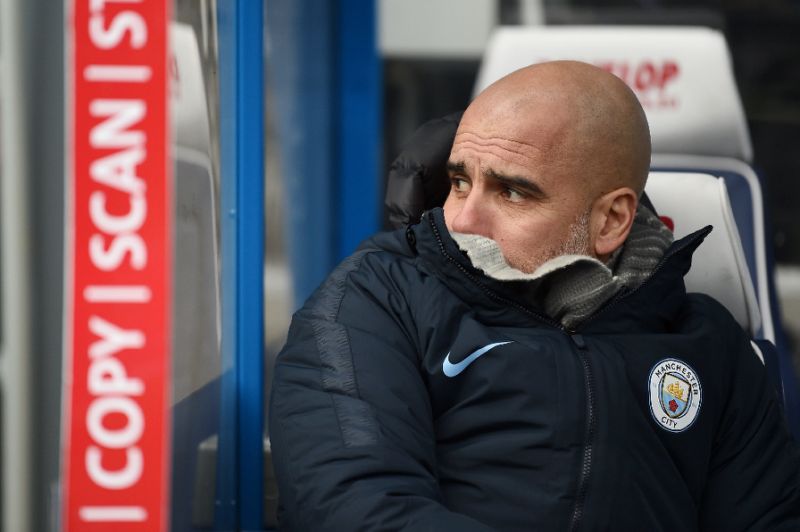 Manchester City manager Pep Guardiola was far from satisfied despite a 3-0 win away to Huddersfield Town on Sunday that saw his side cut Liverpool’s lead at the top of the Premier League table to four points.

Liverpool’s compelling 4-3 win over Crystal Palace on Saturday heaped huge pressure back onto reigning champions City but they were rarely troubled by a Town side that look a certain bet for relegation this season.

City’s first goal, a deflected strike for Danilo in the 18th minute, brought up their 100th goal of the season in all competitions before Raheem Sterling scored a diving header from Leroy Sane’s cross in the 54th minute and Sane himself made it 3-0 with a calm finish just two minutes later.

For Guardiola, it should have been an afternoon of enjoyment as his side again proved their willingness to push Liverpool all the way this season.

The City manager, however, has forged a footballing reputation based on sublime performances as well as ruthless goalscoring and, on that basis, his team’s showing in West Yorkshire was not a success as the visitors never really clicked into gear on a day against a Huddersfield side who had parted company with manager David Wagner on Monday.

‘Improve in the future’

“During the season you have these kind of games,” Guardiola said. “It is important to win. We have scored many goals in all competitions.

“(But) the way we played, we didn’t deserve more than three goals. We will improve in the future.

“We have to demand more from ourselves in every game and do our best, but sometimes it’s difficult.

“Today we are happy we have won but after immediately we have to analyse. During the season you have games when maybe you are not in the top level and it is important to win these games.”

Although City’s fans were happier than their manager following this result, Guardiola could at least take some heart from the fact his side again refused to blink first in the race for the title.

For the second consecutive week, City kicked off knowing Liverpool had already won their weekend fixture and that, consequently, the onus was back on his players to secure three points as well.

Once again, Guardiola’s side managed to do that following up the 3-0 victory over Wolves with this showing and the City manager was more than happy to remind everybody that silverware is not handed out for another four months.

“One team has been better but we’re in January and there’s many more games to play,” he added.

This match was a baptism of fire for Huddersfield’s caretaker boss Mark Hudson and while the Terriers showed impressive fight to inspire some hope this season, this defeat still left them 10 points adrift of safety.

If, as expected, the Borussia Dortmund Under-23 coach Jan Siewert is appointed as Wagner’s permanent replacement, nobody would blame him if he spent his first day in the job preparing for a return to the second-tier Championship next season.