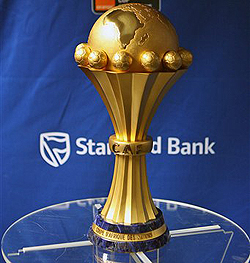 A FIRST-HALF goal from Guy Michel gave Guinea a 1-0 win against Zimbabwe in their Group L match of the 2017 CAF Africa Cup of Nations Qualifier at Stade du 28 Septembre in Conakry.
Despite taking the full three points, the hosts will not reach Gabon next year as they now have eight points from six matches.
The hosts pushed for an early goal in the second minute as they attacked on the left flank, but the shot went narrowly wide from a tight angle.
After 10 minutes, Zimbabwe got a chance to unleash a shot through Knowledge Musona in the box after a good run but Guinea’s goalkeeper produced a fine save.
Nevertheless, two minutes later Syli Nationale broke the deadlock when Michel received a fine pass in the box to beat goalkeeper Tatenda Mukuruva from close range.
Towards the 30-minute mark, the hosts continued to dominate their visitors but were not clinical in the box, missing their chances.
However, Kalisto Pasuwa’s men tried a shot at goal with one minute to the interval but it was deflected to fly over the cross bar.
The hosts continued where they left off in the second half and nearly doubled their lead after 10 minutes when they received a set piece on the right flank, but it went inches over the Mukuruva’s goals.
With 14 minutes remaining, the hosts were all over the Zimbabweans and Mukuruva nearly caused a blunder when he spilled the ball in the box only to be saved by skipper Willard Katsande.
The Southern Africans are now set to end their 10-year absence in the tournament as they qualify for the continental showpiece with 11 points next to their name.Advertisement