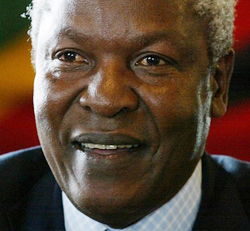 We publish this article after VP Phelekezela Mphoko recently claimed that Mugabe had nothing to do with Gukurahundi. The article contradicts the claim, confirming that the real culprits were Zimbabwean government officials.
THE Ndebele people of western Zimbabwe have a proverb, walutheza olule nkume, which, roughly translated, means “A person picked up firewood in which there was a scorpion, and now the scorpion is out to bite him.” An English equivalent would be: “The chickens have come home to roost.”
Yet when it comes to justice for Zimbabweans who have suffered under the heel of President Robert Mugabe since 1980, the saying rings hollow. And none yearn for justice more than the Ndebele. From January 1983, a campaign of genocide was waged against them, an outbreak of obscene violence that remains the darkest period in the country’s post-independence history, notwithstanding the bloody notoriety of the last decade-and-a-half.
But the truth, at least, is now coming to light. Thousands of historical documents that expose the perpetrators are now becoming available in a raft of foreign archival collections. The documents are wide-ranging and include, among others, diplomatic correspondence, intelligence assessments and raw intelligence garnered by spies recruited from within the Zimbabwean government.
These papers—augmented by the testimony of Zimbabwean witnesses finding courage in old age—substantiate what survivors and scholars have always suspected but never been able to validate: Mugabe, then Prime Minister, was the prime architect of mass killings that were well-planned and systematically executed.
The massacres were closely associated with an effort by Mugabe’s Zanu PF party to eliminate opposition groups in the aftermath of Zimbabwe’s independence. Zapu, a party led by nationalist rival Joshua Nkomo, represented the main obstacle to that objective. Given that Zapu enjoyed overwhelming support among Ndebele, the Ndebele as a whole came to be seen as an impediment. In the words of Mugabe, the people of Matabeleland needed to be “re-educated”.
The little that Mugabe has said since the 1980s on this taboo subject has been a typical mixture of obfuscation and denial. The closest he has come to admitting any form of official responsibility was at the death of Nkomo, when he remarked that the early 1980s was a “moment of madness”—an ambivalent statement that perhaps reflected a fear of ngozi (avenging spirits) more than anything else and one he has not repeated. More recently, he blamed the killings on armed bandits who were allegedly coordinated by Zapu (the original smokescreen) along with occasional indiscipline among soldiers of the army’s North Korean-trained 5 Brigade.Advertisement