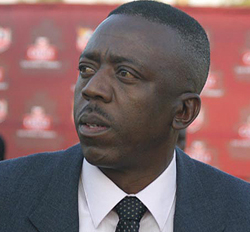 CHICKEN INN coach Rahman Gumbo was left a frustrated man after seeing his side drop two massive points against Shabanie Mine at Maglas Stadium in Zvishavane on Friday.
The Gamecocks went into the match needing nothing short of three points to revive their title charge after going on a three match losing streak.
They started well with their right back Passmore Bernard trusting them into the lead after 32 minutes.
For the better part of the first half the Gamecocks had control of the match with Shabanie Mine failing to capitalise on the few chances that came their way.
The home side went into half time trailing and came back a different side.
Inspired by their captain, Farai Mupasiri, Shabanie Mine raised their game in the second half keeping Chicken Inn busy with endless raids.
In the 62nd minute, Mupasiri curled a free kick into the top right corner to beat Chicken Inn goalkeeper Elvis Chipezeze.
The leveller gave the home side more impetus as they continued bombarding the Gamecocks in the hunt for the elusive winner.
In the end, both teams settled for a draw, which did not help their different causes.
Chicken Inn are still in the hunt for their second league title and were well poised to land the trophy before a slump that has left them in fourth position.
Their opponents, on the day, needed three points to ease their relegation worries, as they are currently facing the chop.
In a post-match interview, Shabanie Mine coach Takesure Chiragwi said while they welcomed the point gained, it was the three points that he wanted.
“We have dropped two points where we were supposed to collect maximum points. We accept the result and we are happy for that point,” said Chiragwi.
He said they hope to collect as many points as possible in the remaining games to avoid a quick return to the lower division.
Gumbo, on the other hand, was livid telling reporters that he felt that Shabanie Mine equaliser came from a dubious set piece awarded by the referee, Lysias Dika.
Advertisement