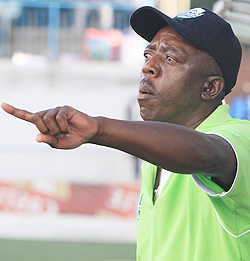 CHICKEN Inn coach Rahman Gumbo is relishing the opportunity to face his former club captain Lloyd Chitembwe as the Gamecocks host Caps United at Luveve Stadium Stadium on Wednesday.
The former Warriors coach won several league titles in Zimbabwe with Highlanders before winning other league titles in Malawi and Botswana.
Gumbo, who was appointed coach of Chicken Inn, replacing Joey Antipas who joined South African First Division side AmaZulu also had a spell at Caps United in 2003.
He is credited with building the Caps squad that eventually won back-to-back league titles under Charles Mhlauri in 2004 and 2005.
“I think it will be a very interesting meeting (against Caps),” said Gumbo.
“Lloyd was my captain during my time there. He is still there as coach. I am proud of him really.
“This will be my second game and I hope the boys will continue from where they left off. But Caps United are playing well; I predict a tough match.”
The Chicken Inn coach got off to a flying start after leading his charges to a 3-1victory over Mutare City in his first match on Sunday.
Caps United have picked just a point from their last two matches after suffering a defeat to How Mine and then drawing 2-2 against Sunday Chidzambwa’s ZPC Kariba at the weekend, results which have seen the Green Machine dislodged by Highlanders at the top.
Chitembwe however, says they are not pressing the panic button yet as the season is still in its infancy.
“Our approach remains the same. It’s only seven games and there is only five points difference with the team at the top,” he said.
“No team has been confirmed champions yet and, for us, we will continue as we have been doing, taking it game by game.
“It will be an interesting match to play against my former coach.”
The Caps United coach will however, be without key players Hardlife Zvirekwi and midfielder Tafadzwa Rusike on Wednesday.
Meanwhile, in other mid-week matches, Norman Mapeza’s FC Platinum travel to Luveve on Thursday hoping to widen the gap at the top with a victory over How Mine.
FC Platinum remain unbeaten in seven starts and their three -0 demolition of Border Strikers on Saturday was a bold statement of intent.
But they face a wounded How Mine who were beaten 2-0 by Hwange at the Colliery on Sunday.Advertisement