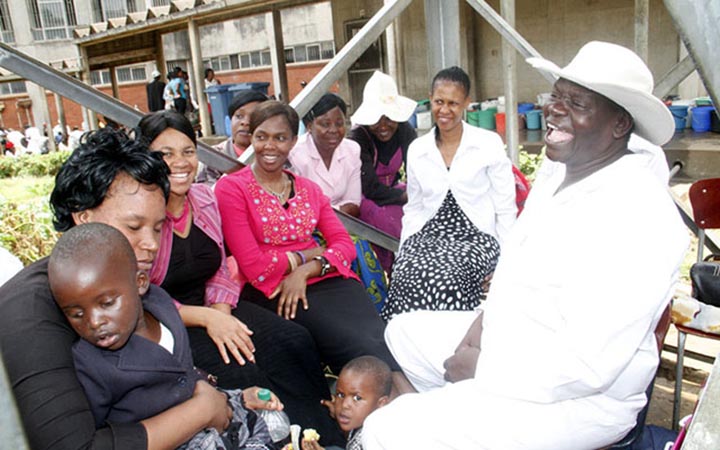 JAILED Independent End Time Message church leader, Robert Martin Gumbura’s multiple wives seem to have lost interest in following up on their husband’s case after they were conspicuous by their absence when the disgraced cleric appeared in court Friday for his foiled prison escape trial.

During the previous years, the 11 would all form a beeline to court while dressed in their signature tops inside frilled dresses.

They would also walk as a group, drawing the attention of people who also attended the courts.

While inside the court room, the seemingly well-drilled unit would create awkward moments as they took turns to chat with their husband using gestures and whispering while waiting for court proceedings to begin.

They would occupy the two front benches in Harare magistrate, Francis Mapfumo’s court and follow the case throughout its endless adjournments and postponements.

Gumbura was jailed 40 years in 2014 for four rape counts but is back in the dock for allegedly conniving with eight other suspects to incite food riots inside Chikurubi prison walls, leaving left several inmates dead. Their trial started in 2015.

About 23 witnesses were lined up to testify but only four have since given their testimonies to date.

The group is being charged for allegedly attempting to escape from lawful custody.

Following his foiled jailbreak, security has been beafed up each time they appear in court as they are also escorted by members of the Zimbabwe Republic Police.

There will be heavy security inside the courtroom comprising armed police officers and prison wardens.

Security details will also be outside the court with some seated in police vans.

As the suspects make their way from the court cells to court rooms, they produce an unmistakable sound with leg irons and they are often too vocal.

Before their new lawyer Lovemore Madhuku was hired, the suspects especially Chiduke and Mhungu often took time to grill witnesses during cross examination in some rich English accents.

Madhuku was hired to speed up the trial process which has gone on for three years now.

The new attorney is however still being assisted by Gumbura’s lawyer, Tapson Dzvetero.

Some of the witnesses who have testified include John Mutizwa, a former police officer who is serving 16-years for vehicle theft.

Other witnesses who have testified so far are Davison Mutakaya, who has since finished serving his jail term and Augustine Matare, a prison officer.

Gumbura will be back in court on January 14 for continuation of trial.